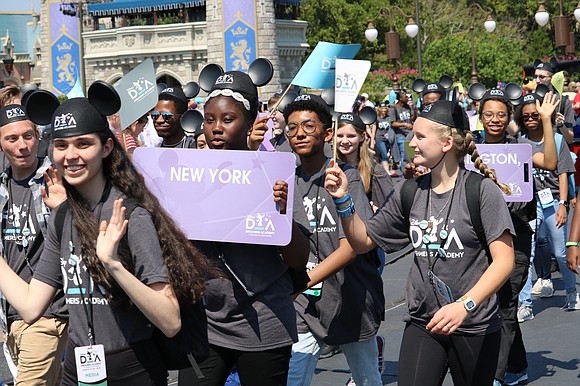 Students from New York participate in a parade at the 2019 Disney Dreamers Academy Photo courtesy of Randall G. Jefferson

ORLANDO, Fla - The Walt Disney World Resort welcomed the 100 teens selected to participate in the 2019 Disney Dreamers Academy with Steve Harvey and ESSENCE Magazine on Thursday.

As the Dreamers Academy enters its 12th year, organizers said the event aims to empower youth to make their own dreams come true. Thursday’s theme was “ BE 100: DREAM IT. DO IT” setting the stage for the weekend’s activities. 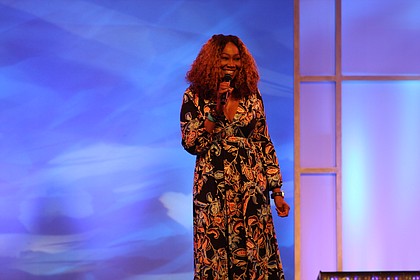 The Dreamers participated in a parade on Main Street in the Magic Kingdom theme park on Thursday. The parade featured ESSENCE Magazine’s Mikki Taylor, actors Andre Johnson of ABC’s “Black-ish” and Trevor Jackson of “Grown-ish”, along with Disney characters and former Dreamers. 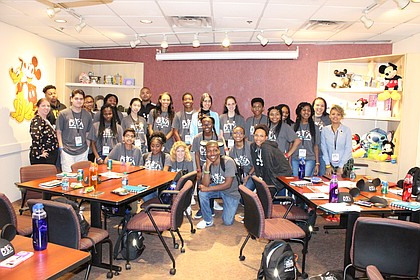 Students at the 2019 Disney Dreamers Academy

This year's group traveled from across the nation for the all-expenses-paid trip to Disney World. Over the next few days, the teens are participating in hands-on workshops in fields they selected. Experts, motivational speakers and celebrities will serve as their mentors and instructors.

During the welcoming ceremony on Thursday, Walt Disney Parks and Resorts Vice President and DDA Executive Champion Tracey Powell said this year’s dreamers have diverse ideas on how to change things.

“We have here amazing minds who want to pursue a wide variety of careers yet have one thing in common; they want to make the world a better place,” she said.

Powell made the surprise announcement that applications are now open for the 2020 Disney Dreamers Academy are now open. Students age 13 to 19 can go to www.disneydreamersacademy.com to apply

CEO of ESSENCE Communications Michelle Ebanks said the Dreamers Academy is about making a difference in the lives of the teens so they have the skills to pursue their own success.

“We have a remarkable group of students attending this year,” said Ebanks. “At ESSENCE, we embrace the mission of inspiring the next generation of leaders, and we’re looking forward to partnering with Disney once again to cultivate greatness in the 2019 class.”