Is Eli Manning still a Giant for sentimental reasons? 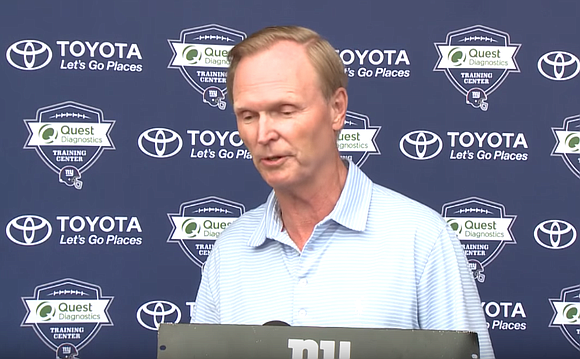 Giants co-owner John Mara has been a little perturbed by the insinuation that the Giants are reluctant to move on from their longtime quarterback Eli Manning due to the emotional connection between the organization’s leadership and the 38-year signal caller.

With the trade of star wide receiver Odell Beckham Jr. to the Cleveland Browns and owning the sixth overall pick in the NFL Draft which will take place exactly 28 days from today, many Giants fans and football fans in general firmly believe it is time for the Giants to begin a new era with Manning’s successor.

“I’ve read that and I have to tell you that really gets under my skin,” Mara said March 24 to reporters in Phoenix at the NFL owners meetings. “Because that is absolutely nonsense. Do I feel a certain amount of sentimentality towards Eli? Of course I do. Would I ever let that get in the way of making a football decision? Absolutely not. And I cannot believe that some of you write that.

“I would never tell a coach or a general manager we’ve got to keep this guy because we love him and because he’s done so much for the franchise,” added Mara. “Make a football decision based on whether you think he can play or not. And if you think he can and you have a conviction and the coach has a conviction, fine. I’m never going to interfere with that based on my sentiment towards a player.”

While the Giants’ one playoff appearance in the last seven seasons is not primarily attributable to Manning, he has by and large been inconsistent and has readily admitted his part in the team’s inability to sustain winning seasons. After drafting the supremely gifted running back Saquon Barkley with the second pick last April, the Giants have the possibility of using the pick to select a QB—perhaps Oklahoma’s Heisman Trophy winner Kyler Murray or Ohio State’s Dwayne Haskins.

They could also go the trade route to obtain a young quarterback with long-term potential such as Josh Rosen of the Arizona Cardinals, who was taken 10th in last year’s draft but may be expendable if the Cardinals take Murray with the No.1 pick as has been rumored.

Giants general manager Dave Gettleman said on a conference call with reporters a little less than two weeks ago, “This narrative Eli is overpaid and can’t play is a crock.” Manning has a base salary of $11.5 million next season and has already received a $5 million roster bonus.

“I’m telling you. So at the end of the day you guys got to say Gettleman’s out of his mind, or he knows what he’s talking about when he evaluates players. That’s really what it is. That’s really where it’s at.”

Where it’s at is somewhere in the middle. Which has many loyal Giants fans clamoring for a change.