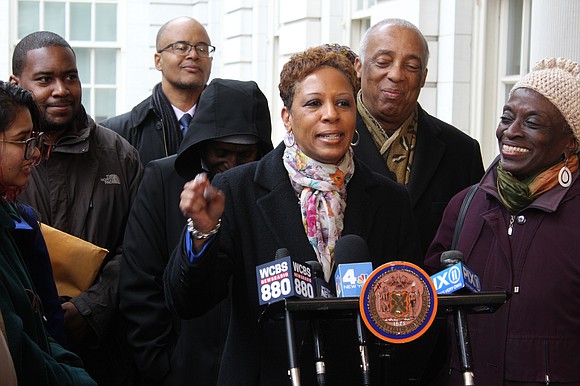 New York City’s specialized high schools are at the center of another debate.

Earlier this month, the results of the latest specialized high school exam were made public, and out of the 895 students accepted into Stuyvesant High School only seven were Black. That’s less than 1 percent of the incoming freshman class. Black and Latino students make up 70 percent of New York City’s public school system, but only 10 percent of those who are admitted into the eight designated specialized high schools.

Of the eight specialized high schools, the admissions policy of five of the schools (Brooklyn Latin, the High School for Math, Science, and Engineering at City College, the High School for America Studies at Lehman College, the Queens High School for the Sciences at York College and Staten Island Tech) can be set by the mayor. But Mayor Bill de Blasio told WNYC Radio’s Brian Lehrer that he wants to change all eight schools’ policies universally out of fear of creating a second tier among the elite schools.

“There are other legal issues that make us feel like a single legislative fix is the best and most effective, most lasting, unchallengeable way to get this done once and for all,” said de Blasio.

When asked if he’d spoken to New York State Assembly Speaker Carl Heastie about changing the SHSAT, de Blasio said he has resigned himself to the issue not being resolved in the immediate future.

“Only discussion we had was an acknowledgement that that’s not going to be addressed in the budget,” said de Blasio during a press briefing. “That there will be a very—he said there will be hearings, there will be a vibrant discussion on that issue. We are going to work with everyone constructively to find something that the Legislature can agree on but I would bet a lot of money that that doesn’t get resolved until the end of June.”

“First and foremost, I don’t support any specialized elitist school,” said Assemblyman Charles Barron. “All of our children are special and all of our schools should be treated like specialized high schools with the resources. To have this test that only gets 10 percent of Black and Brown students in is unconscionable, unacceptable and absurd. Our children are smart enough to ace Stuyvesant. Don’t tell me there are only seven Black students worthy.”

As he finalizes the date for a public meeting about this very issue, the ofttimes uncompromising elected official added, “Most of the students that get into specialized high schools go to cram schools that teach the test. My bill, A.2173, says what the chancellor and the mayor say: 7 percent of the top students from each middle school should be accepted into the specialized high school.”

But, for certain people, any plan to eliminate the exam was dead on arrival. When the AmNews contacted New York State Sen. and Bronx Science alum John Liu about his rejection of de Blasio’s plan to fix the admissions process, his spokesperson said all communities needed to be included, not just Black and Hispanic ones.

“The mayor’s plan was formulated to the total exclusion of the Asian American community in New York and is therefore racist and cannot be the basis for any discussions going forward,” said Liu’s spokesperson.

Barron slammed Liu’s opposition to his bill, declaring, “He said the bill is dead on arrival. Well, he already supported convicted manslaughter cop Peter Liang who killed a young Black father; now he wants to kill a bill which would give an educational opportunity and equal access to Black and Brown students.”

Amy Hsin, an associate professor of sociology at Queens College, has been a critic of the SHSAT online. Hsin spoke about the exam and said it was “alarming” that people see only seven Black kids getting into Stuyvesant as normal. “There are more than seven highly educated Black kids,” she said.

“I think the reasons are complicated,” she continued when explaining the pushback from those in favor of keeping the exam. “I think people think that because we have this test and everyone, in theory, has access to the test and the perceived objectivity of the test allows them to rationalize this as an objective outcome. There is nothing objective about this process.”

According to the Department of Education, approximately 27,500 eighth graders took the SHSAT with more than 5,800 receiving an offer to one of the eight specialized high schools and the Fiorello H. LaGuardia High School of Music & Art and Performing Arts. Overall, 10.5 percent of offers went to Black and Latino students, identical to 2018’s number (10.4 percent). Students will receive offers to the Discovery Program later on this spring.

Putting action to his words, Sam Adewumi spends his weekends and spare time preparing pre test materials and teaching Black and Brown children how to prepare for the SHAST.

Adewumi is the founder of Creative Achievement Success Prep, which alongside fellow volunteer organization Navigate the Maze to Achievement prepares students for the Specialized High School Admissions Test, and cites that 33 percent and 27 percent of their students, respectively, have been offered places at the city’s specialized schools.

He asserted, “Whether or not we keep the test isn’t the real issue. The real issue is what do we do to dramatically increase the number of high performing students in communities of color. If we solved that problem we would solve the problem the test presents.”

He also noted, “It is my belief that it is our collective responsibility to ensure that our children are provided with educational opportunities in order for them to grow and reach their full potential. Parents, politicians, community leaders, schools and support organizations such as CAS Prep must all be willing, active and enthusiastic members of this matrix. CAS Prep believes that every child should be afforded access to a quality educational experience, which includes tutoring, test prep and educational enrichment.”

Meanwhile, the city’s new Public Advocate Jumaane Williams said the test should stay, but other options should also be explored. “There have been fierce arguments on both sides of the debate over that exam, which is the sole criteria for admission to the city’s specialized high schools. They paint the issue in absolutes and pit groups against each other.” He called on his own personal experience.

“I’m a public school baby, from pre-school to Master’s. And all the way up, my nicknames were ‘Needs Improvement’ and ‘Promotion in Doubt,’” said Williams. “For a kid with ADHD and Tourette’s, it’s incredible that I made it through at all. Much owed to having a mother who always pushed me and teachers like Ms. Jeanne Nedd, who wouldn’t give up. But the next biggest factor in my education may have been getting accepted to Brooklyn Tech. Without that, I may not be where I am today. And I couldn’t have taken that step without the SHSAT.”

An important factor to remember, Williams said, is that “New York City is home to one of the most segregated school systems in the country, with or without the SHSAT.”

He elaborated, “The most clear failure has been in establishing an accessible pipeline for students of more color to prepare for the exam—not only in specific test prep courses but in the classroom and curriculum. In the past, gifted-and-talented programs in middle schools have been a reliable pathway toward specialized high school admission. More recently, we have seen such programs scaled back and cut—including the very program from which I benefited. A concentrated effort to expand G&T programs in all boroughs and all communities would provide a natural pathway to prepare for the rigors of not only the admissions exam but the curriculum at the specialized schools.”

New York City Schools Chancellor Richard Carranza said that while he’s happy to see more New York City children living out their dreams of attending a specialized high school, he’s not happy with how Black and Latino kids are being pushed away from that dream.

Hsin parrots the criticism among other educational activists that the material on the SHSAT isn’t aligned with what’s taught in schools, it’s not something administered to all children and it’s something that people have to spend a lot of money and time to prepare.

“The first reason is that there are many high-achieving Black and Latino students who are denied access to elite high schools because of the test and the admissions process isn’t fair,” Hsin said. “The larger problem is that a sizable portion of Black and Latino kids don’t have opportunities in K through 8 that would allow them to excel on the test. People who note the second [reason] use it as an excuse to not address the first.”

In a recent report by The New York Times, Black and Latino Stuyvesant students talked about the race-base discrimination they face in the school from other students. Some complained of being told they only got into the school because they were Black despite the SHS process not accounting for race or asking if they got in through the Discovery Program assuming they weren’t “smart” enough to pass the test outright.

At this point, Hsin thinks that until the admissions process changes, Black and Brown students might be better off not going to a school like Stuyvesant just to maintain their psyche and mental health.

“If you’re a Black or Latino kid, I don’t know if you want to go to Stuyvesant given the environment and given that you’re such a minority that environment becomes toxic for you,” said Hsin. “I think the fact that it kind of exacerbates the problem where you have low numbers and a perceived hostile environment.”

Following a press conference at City Hall, Barron doubled down on his position, stating, “No other city in the country has a single test for entry into these specialized high schools and it shouldn’t be in New York City. End the racism now. Let our students in and improve the entire school system. We don’t need elite schools.”