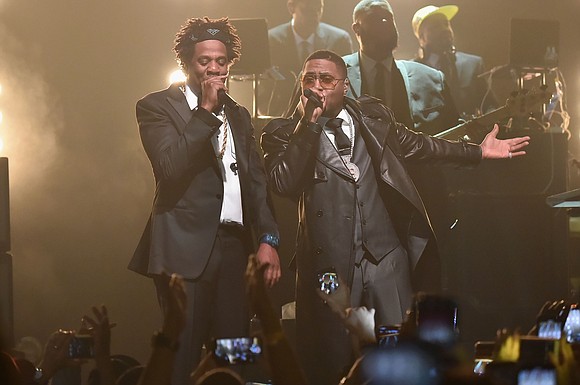 There was no politicking from the sidelines at Jay-Z’s historic opening show at Webster Hall on Friday, April 26, following the completion of the total renovation of Manhattan’s historic East Village concert venue. The ‘B-Sides 2’ show was reminiscent of a similar-themed show at New York’s Terminal 5 back in May 2015.

Packed was the audience. “Gonna keep it gutter,” DJ Clark Kent said as he spun grimy, heavy-based tunes for well over an hour to get the audience hype as they awaited Hov to grace the stage with his tuxedo, Roc-A-Fella chain and Afro’d bandana self. The vibe was nice. It was all one love for the man who in his shared wisdom recently stated, “You can’t have a solution until you start dealing with the problem. What you reveal, you heal.”

Awoken to his “wokeness” in the last couple of years the Mr. of the Carters brought his Reasonable Doubt to 4:44 self and dipped deftly in and out of his vast array of tracks from albums past. Even the unknown ones were known.

He couldn’t slip a lyric by this audience of happy STANS. They know their Bed Stuy original.

Burying any old beefs/rumors/thoughts of thoughts the crowd went bananas when Jay-Z brought out Nas and then Cam'ron and Jim Jones—they rapped, they dapped, they hugged, Hov let them shine in their moments

Young Dirty Bastard—son of the late Big Baby Jesus among other knowns—weaved through the very engaged audience, as did Kool Herc and his curious and attention-grabbing flashlight headgear. Meanwhile, Beyoncé kept it cool and supportive as she rocked in the balcony to her husband’s stellar performance.

It was all about the B-sides, “Don’t blame me if my B-sides are A-sides,” he opined. Didn’t matter though, because, those certified hip-hop aficionados and assorted basement dwelling, earphone/buds people knew every lyric to every track anyway.

It was golden. Almost two hours.

When I last saw Shawn Carter it was during his weeklong gig at the brand-new, then controversial Barclays Center. Activists like Man Up Inc.’s A.T. Mitchell and Lifecamp’s Erica Ford called on him to address inner city violence. He didn’t, so they brought out symbolic caskets to highlight their point. This time Jay-Z took it upon himself to go in deep a little bit. He talked about burgeoning gentrification, and free styled off-the-top about Nipsey Hussle.

“Gentrify your own hood before these people do it/ Claim eminent domain and have your people move in/ That’s a small glimpse into what Nipsey was doing/ For anybody still confused as to what he was doing.”

While saying he hoped this was an AA-free zone, and urged people to drink responsibility– the Boy-Dun-good-From-Marcy-Houses played impromptu bar man doling out glasses of chilled bottles of his Ace of Spades.

An interesting mix was the crowd; a large white population—old and executive, next to white kids determined to be “down” and included—and then the Black folk, mad glad to be in the building. You got the feeling that they were the real Day Ones, who had been there with and for Hov since the very beginning when he was a scrappy young kid, scrambling on the block. Now he is a multimillionaire. This is America.

Speaking of big money, that’s what it took they say to renovate, and make brand-new the sparkling venue, which has operated as a venue since 1886. Before the gig Brett Yormark, CEO of BSE Global announced, “When we were thinking about who would be the right choice to open this legendary venue, we knew it had to be a world-famous New York City icon. No one fits that description better than Jay-Z [to] join an unparalleled list of celebrated performers who have played Webster Hall.”