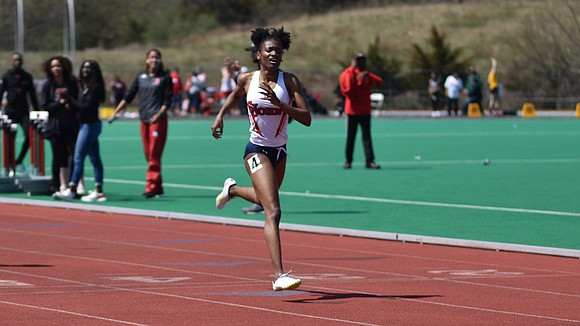 It was a successful trip to Philadelphia for St. John’s University’s track and field team, which posted impressive results at the Penn Relays. Senior thrower Jennifer Odoemene won the bronze medal in the hammer throw. The 4x100 relay team took silver and posted a season’s best time. Eboni Birch finished fifth in the heptathlon. The 4x400 meter relay team qualified for the College Final, in which they placed eighth, and the 4x200 relay team won its heat and placed fifth in the final.

Leah Anderson from Mt. Vernon ran on all three relays. After starting indoor season battling plantar fasciitis (inflamed tissue at the bottom of the foot), the sophomore sprinter has hit her stride during outdoor season. Things started to come together when the team traveled to California in late March for the Stanford Invitational. There she placed second in the 400-meter dash behind Olympic gold medalist Dalilah Muhammad.

“When then race went off, I didn’t expect to do as well as I did,” said Anderson. “That’s where my season kicked off. Then, my huge personal best [in the 200 meters] in New Jersey [at the Sam Howell Invitational].”

A perfectionist with high expectations, Anderson said her second-place finishes in the 200 and 400 meters at the Big East Indoor Track & Field Championships were okay. She was also part of the winning 4x400 relay team.

“I didn’t meet my standards that I set for myself,” said Anderson. “I wanted more. [When outdoor season started] things just changed. There was a whole new mentality and I was ready from the jump.”

Anderson described being a student-athlete as a balancing act between athletics and academics. She tries to not let either suffer, but sometimes she has to make one a priority. Originally a graphic design major, Anderson has shifted to illustration. “I’m back on top,” she said. “I’ve got my A’s back.”

Almost halfway through her college days, Anderson has appreciated the athletic abilities she’s honing at St. John’s. The Red Storm is next in action on Saturday at its home meet, the Tom Farrell Classic.

“[At Tom Farrell] I hope I’m running another 100 just so I can see how fast I can actually get in that event,” said Anderson. “Big East Championships is at Icahn Stadium. I ran there my whole four years of high school. I know that track. I’m ready to win.”