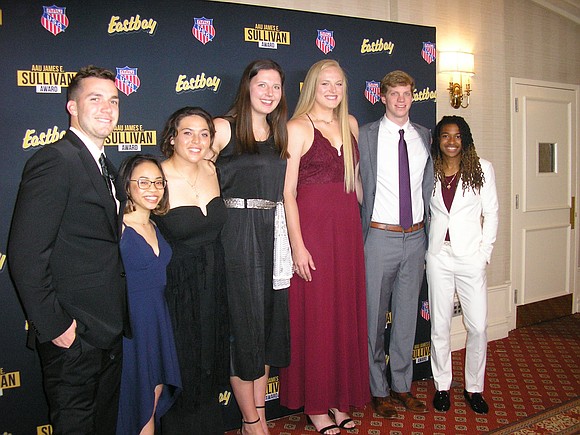 The eight finalists for the 89th annual AAU James E. Sullivan Award have achieved incredible heights in their individual sports—World Champions, NCAA Champions and an Olympic gold medalist. The award honoring America’s top amateur athlete recognizes not only their athletic accomplishments, but also leadership, character and sportsmanship. For the seven finalists who were at the New York Athletic Club for the ceremony on April 16, it was a chance to hear about each other’s experiences, training and inspirations.

“It’s been fun to have conversations about their lives, their schools and their different experiences,” said Kathryn Plummer, a stand-out member of the volleyball team at Stanford University and a two-time NCAA Champion.

The youngest of the finalists was gymnast Morgan Hurd. “It’s really cool getting to talk to people in other sports and hear their stories,” said Hurd.

“The goal this year is to get to the World Championships and win gold,” said Hobbs, who went undefeated in her senior season at Louisiana State University. “Being in this building where great people walked is a blessing.”

Garcia is excited that softball is making its Olympic return in Tokyo and a bit awed that her teammates could be people she looked up to as a kid in the sport. “You see athletes who inspired you to play the sport that you love,” said Garcia, a redshirt junior at UCLA. “Softball continues to grow. To be a part of the Sullivan is so great for the softball community.”

The Sullivan Award went to Plummer, who reinforced a theme of the ceremony: showing appreciation to the families, coaches and support systems that enabled them to achieve their successes.

“Thank you to the AAU and the NYAC for holding this event and allowing me to meet some of the coolest people,” said Plummer. “These are the best athletes in the country, but they’re also so smart, so hardworking, so funny…Looking forward to the future, I can’t wait to be a role model for little girls.”