Carranza sticks to his guns, fights for change to SHSAT 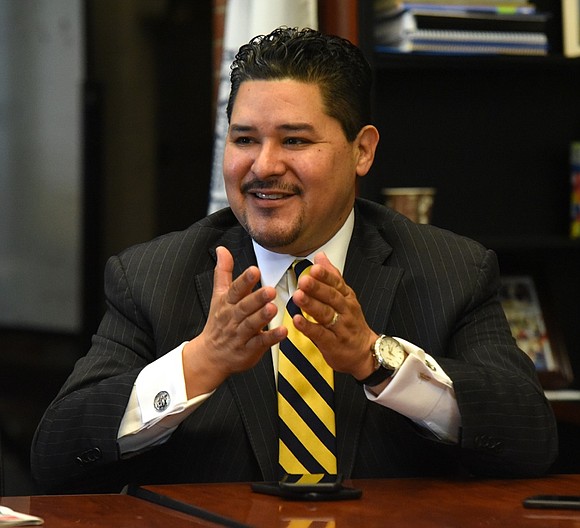 Carranza recently hosted a town hall in District 20 (which encompasses the Brooklyn neighborhoods of Bay Ridge, Dyker Heights and parts of Sunset Park), where parents pushed back against his and the mayor’s desire to eliminate the Specialized High Schools Admissions Test as the sole criterion for admittance to schools like Bronx Science, Brooklyn Tech and Stuyvesant. The district has served as something of a pipeline to specialized high schools.

According to the education-oriented news site, Chalkbeat, the Christa McAuliffe School in District 20 and Mark Twain I.S. 239 in District 21 (also in Brooklyn) have more students admitted into specialized high schools than the city’s 10 poorest districts combined.

Carranza and De Blasio want to eliminate the SHSAT and replace it with a policy that admits the top students from every public middle school.

Last week, Chair of the Committee on Education Council Member Mark Treyger and Chair of the Committee on Civil and Human Rights Council Member Mathieu Eugene hosted a joint hearing on school segregation in New York City. While he couldn’t attend, New York City Public Advocate Jumaane Williams submitted testimony that a representative read. Williams said that the city needs to focus on segregation outside of the crown jewels of the city’s public education system.

“The conversation about diversity in education has long been focused on the Specialized High School Admissions Test,” read Williams’ testimony. “This presents the false impression, the false narrative that segregation begins and ends in our specialized high schools—nothing could be further from the truth. This segregation is pervasive throughout our entire system, including at the elite multiple-criteria schools, which already exist.

“We need to discuss these schools, yes, but not without the context of the rest of the system—where segregated middle and elementary schools cement a system that impedes advancement and substandard schools citywide drive the cutthroat process of high school admissions which only deepens division,” Williams’ statement continued.

New York State Senator John Liu agreed with Williams that the city should focus more on school segregation around the city and not just the SHSAT. Liu said that while he finds the test gap among races deplorable, he doesn’t think the city’s going about change the right way.

“I don’t fault the chancellor for being new on the scene and trying to fix a problem that has only been exacerbated over the last five years,” said Liu. “The race gap is just woefully intolerable. Now, the chancellor and the mayor think that they can make this all go away by eliminating the SHSAT. They think that’s the quick fix. It’s going to take a lot more than a quick fix to truly fix schools for Black and Brown students.”

When asked if he had a solution for how the city could address the SHSAT issue, Liu said that he’d refrain from answering while the city’s in the middle of conducting community forums on the issue of specialized high school admissions and school diversity. Liu said he didn’t want anything he says to prejudice any opinions that could be raised at these forums (the next one takes place in Brooklyn at the NYU Tandon: Bern Dibner Building—Pfizer Auditorium from 6 p.m. to 8 p.m. this Friday, May 10).

“For the city to completely ignore the Asian community with deliberate disregard, knowing what the feedback would be, is simply racist,” said Liu. “It’s like the city trying to change or even abolish minority business programs without consulting any African-Americans.”

According to the Department of Education, however, Carranza and the city will continue to push for the elimination of the single-admissions test.

“A single test doesn’t capture the full talent of students, and our proposal will expand opportunity for the highest-performing students in middle schools across the city,” said a DOE representative. “We’re going to keep fighting to advance equity now, no matter how much a few billionaires spend to preserve a broken status quo.”

The DOE representative was referring to the news of former Citigroup Chair Richard Parsons and cosmetics heir Ronald Lauder bankrolling efforts to influence Albany lawmakers to keep the SHSAT as the only form of admittance to specialized high schools. The group, known as the Education Equity Campaign, is designed to lobby state legislators, engage in public relations and advertising to influence the public in favor of the SHSAT.

On the Education Equity Campaign’s website, the group advocates for an increase in the number of specialized high schools, more gifted and talented programs, more investment in test prep and more investment in improving middle schools and asking every eighth-grader in New York City to take to SHSAT. A video on the website shows an ad featuring 1994 Brooklyn Tech Graduate Rev. Kirsten Foy speaking on behalf of the group’s proposals.

But according to Liu, the moneyed men joining the fight won’t matter because New Yorkers can do this alone.

“I don’t know where they’re coming from,” said Liu. “I have no contact with them. This is not a big money issue. I guess it’s their money and they can use it however they like, but their voice isn’t going to be louder than the voice of the parents who show up to the community forums.”