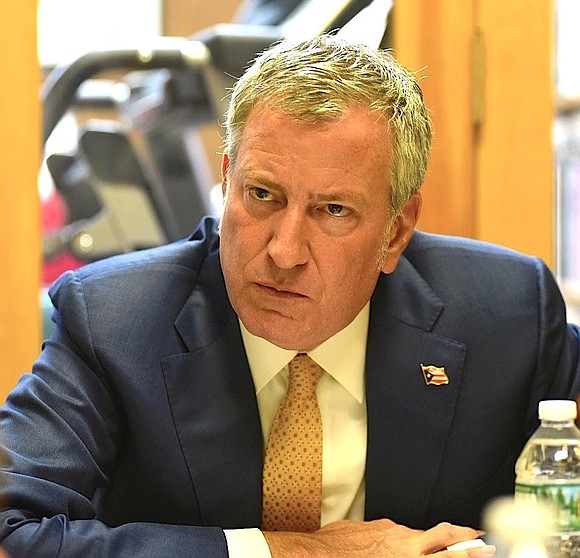 Does he think he’d make a good president or is he running away from his problems?

New York City Mayor Bill de Blasio is allegedly eyeing a run for president. Although he hasn’t announced it yet, throwing his hat into the ring would make him the 23rd Democrat to announce a presidential run for 2020.

De Blasio spoke with reporters on Tuesday and pushed back against gossip that he’s dragging out his decision to run because of accusations of an alleged “pay-to-play” culture at City Hall and several alleged conflicts of interests.

“All of these thing were looked at,” said de Blasio to reporters in the Mott Haven section of the Bronx. “I think when a lot of people look at something and they come away with nothing, it’s pretty damn clear.”

“All I said was the month of May,” said de Blasio. “I didn’t say a particular day.”

A redacted report by the New York City Department of Investigation stated that de Blasio openly solicited contributions from people and organizations who were in the middle of doing business with the city. Last year, restauranteur Harenda Singh pled guilty to trying to bribe the mayor to get a better lease on the now-closed Water’s Edge in Long Island City. At the time, de Blasio’s people implied that Singh lied about the situation. The mayor also faced scrutiny for appointing Fernando Bohorquez, a campaign donor, to the city’s Conflicts of Interest Board.

On NY1’s “Inside City Hall” with Errol Louis, de Blasio said that while running for president would put him in a different space, his accomplishments as mayor have prepared him for the White House if he wants to run.

“It’s a whole different reality and one journalist once said to me, you know, you are very busy Mr. Mayor, you have a very demanding job, isn’t it hard to consider something like this?” asked de Blasio. “And I said well, don’t you think an office of this importance should be for someone who has a demanding job and is doing big things and is busy? So I would argue that the first question is, you know, what does it take? You’re really asking the question what does it take to do that job, I would argue it takes ideally a lot of experience running something big and complex and demanding.”

The mayor also told Louis that he’s confident in the team he’s put together to continue moving New York City in the right direction and pointed to improvements in neighborhood policing, his affordable housing plan and the implementation of universal pre-K.

But according to some New Yorkers, de Blasio’s tenure at City Hall leaves a lot to be desired.

“Mayor de Blasio needs to focus on this city and its problems, especially those that have worsened during his administration, like homelessness and overdose deaths,” said Jeremy Saunders, co-director of VOCAL-NY, in a statement. “New Yorkers have sent a clear message they do not want him embarking on this presidential bid. His response has essentially been that people just don’t get his and Chirlaine’s vision, which illustrates just what he thinks about the concerns of his constituents.”