A fair wage for working men and women 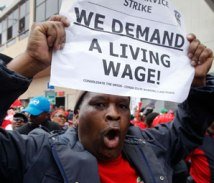 There’s a push in Albany right now to make sure that construction workers who work on projects funded with taxpayer money are paid a fair wage. For more than a century, that’s been the law—publicly-funded projects in New York are required to pay a prevailing wage.

The complication is that so many big projects are funded as public-private partnerships, which creates a loophole for developers who want to increase their profits by using cheap labor. Now, those developers are spending big on a political campaign to protect their loophole.

As part of their campaign, the developers are attacking labor unions and trying to muddy the waters about who’s fighting for people of color. They’ve even created fake organizations to make it seem like they care, but I’ve been working in the construction trades for over a decade now and I’ve never heard of any of these new groups.

For me, a union job is what changed my life. So I know firsthand that it’s unions that fight for people like me.

I was born and raised in the projects in the Bronx. I didn’t have parents and I didn’t have a stable home. I barely got by on food stamps.

Growing up, my dreams didn’t go beyond the four walls of my apartment. I didn’t graduate high school, but I earned my GED. Despite all of that, I made it when all the odds were stacked against me thanks to the advantages of a well paying career.

Through hard work, dedication and a union job, I was able to secure life-changing wages and benefits that changed the course of my life for the better.

These apprenticeship programs are changing the face of the building trades. In fact, more than half of the unionized construction industry (55.1 percent) is comprised of people of color, a drastic shift from the demographics of the past.

Meanwhile, African-American workers are dramatically underrepresented in non-union shops, and non-union Hispanic workers earn 34.5 percent less than those in unions. The non-union programs like to mention their apprenticeship programs, but they refuse to share their graduation rates. That’s because these programs are little more than window dressing, just a talking point in a press release.

I don’t have time for window dressing. Working on projects that pay area standard wages has given me the opportunity of freedom.

I want my neighbors, especially those who come from the projects like I have, to have access to the same opportunities, and that’s why my union is fighting so hard for people like me.

Public subsidies require public responsibility. This is why we need to attach prevailing wages to public works projects. It will provide pathways to success. It will change lives and uplift families out of poverty. Working men and women deserve a fair wage for public work.