Investing in the community and knowledge 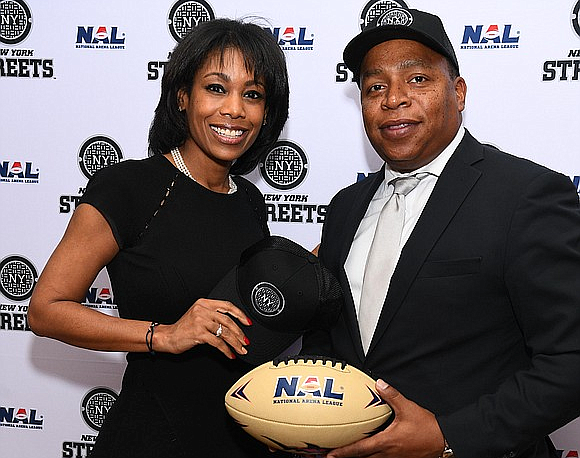 Power couple Corey and Tamara Galloway are transforming East New York and Brownsville by investing in the Brooklyn communities. With their keen senses in business and development, they have also made history as the first Black sports owners in New York history.

Corey is the founder and chairman of Legacy Growth Partners, LLC, a private equity firm with investments in entertainment, manufacturing and real estate, and Tamara serves as the firm’s president. The firm’s partners including Goldman Sachs and LGP will commit $20 million to develop and improve vacant lots throughout Brooklyn’s East New York and Brownsville neighborhoods to create affordable housing for low-income families.

“We knew that East New York and Brownsville was going to be an up-and-coming space,” Corey said. “We’re providing programs to first-time homebuyers. One of the keys to getting capitol is homeownership to build generational wealth.”

However, the couple’s claim to fame is their ownership of the New York Streets arena football team. The team is the newest professional sports franchise in the state debuting in 2018.

A Brooklyn native, Corey said in 2018 that he wanted to create a space for local children where they could get affordable entertainment.

“It’s always been a dream of mine to bring professional arena football to New York and increase opportunities for so many talented athletes,” he said. “As the only Black owner of a professional sports team in New York, I am especially proud to lead a team that will reflect the inclusive values that are the cornerstone of my business and of this city.”

The team plays in PacPlex in Brooklyn, which is the largest sports, recreation, and education complex in the five boroughs. PacPlex also houses the Brooklyn Lifestyle Athletic Club providing the community with an indoor area, swimming pools, basketball and other amenities. The facility also has activities catering to everyone from children, adults and seniors.

“It’s been an amazing facility that’s been around for 30 years and we’re rebranding it right now,” Tamara said. “We wanted to create something where we can give back to the community and better lives not just in athletics but also in academics.”

Before becoming married business partners, Tamara and Corey met through online dating and found out they had similar interests and ran in similar social circles. A romance blossomed into marriage. The couple have four children.

Both worked for large companies before deciding to go into business for themselves. Corey spent more than two decades in finance, operations and marketing experience. He’s a former director of operations and finance at MTV Animation department as well as director of global production at Sesame Workshop. He holds an MBA from Pace University and graduated from the OPM program at Harvard Business School.

Tamara previously held executive leadership positions at Time Inc. and Condé Nast, where she was instrumental to the growth of brands including Real Simple and VOGUE. She also served as executive vice president of GLAAD.

After investing in several projects from real estate development to even a movie, Corey said he wanted to build his own firm.

“I wanted to get in the driver seat and not the passenger seat,” he said. “I wanted to invest in my own things.”

As far as what’s next for the couple, Corey and Tamara hope to educate as many people as they can about investing in the community and owning and being an example.

“One of the things we are trying to do is have a voice so people will see us and know they can do it also,” Tamara said. “We are regular folks and we want to make sure we are spreading our net out.”