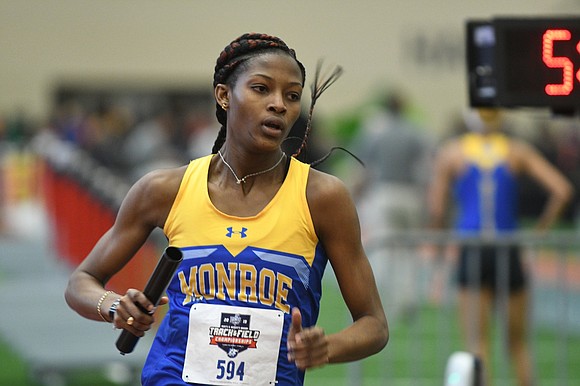 The women’s track and field team at Monroe College has an incredible amount of talent. Several athletes have qualified for the NJCAA Division I Outdoor Championships to be held in New Mexico later this month. Among them are freshman Joanna Archer and sophomore Claudrice McKoy. Both are from the Guyana, and having an international college team helped ease their transition to being student athletes in the U.S.

“In terms of athletics and academics, I can’t complain. It’s actually great,” said Archer. “In terms of doing things I’m accustomed to at home, like just taking a long walk, I don’t do that. Anytime you get is for studying, rest and recovery.”

Archer, a criminal justice major, had never competed indoors before coming to Monroe. While it was a bit of an adjustment, she said with amusement, “I won the 800 at the National Championships, so I guess it’s been good.”

In April, Archer, 18, and McKoy, 19, represented Guyana at the Carifta Games in the Cayman Islands, with McKoy winning gold in the 1,500 meters and bronze in the 3,000 and Archer getting silver in the 800 with a personal best. The travel and going from cold weather to hot and back to cold was a bit debilitating, but they’re grateful for the experience.

Both have Olympic aspirations, although they see it as a long-term goal for 2024. They’re grateful for the collegiate opportunities in the U.S. so they can further their training. Archer hopes to get in some international competition this summer, including the Pan American U20 Athletics Championships, which will take place in July in Costa Rica. Then, she’ll head back to Monroe for the fall semester.

This is McKoy’s final year at Monroe because the Mustangs compete as a two-year program. In the fall, she’ll be a student athlete at Texas Tech University. The coaches at Monroe have helped her refine her technique and improve her endurance and speed. McKoy excels at middle distance—the 800, 1,500 and 3,000.

“At home, it’s basically me alone. There’s not much competition. International competition pushes you to improve,” said McKoy, a business administration major.

“At Monroe, I’ve learned different cultures, different people and different backgrounds,” she added. “Going to another school, I know I am prepared to deal with others. I’m ready. I think I will improve.”