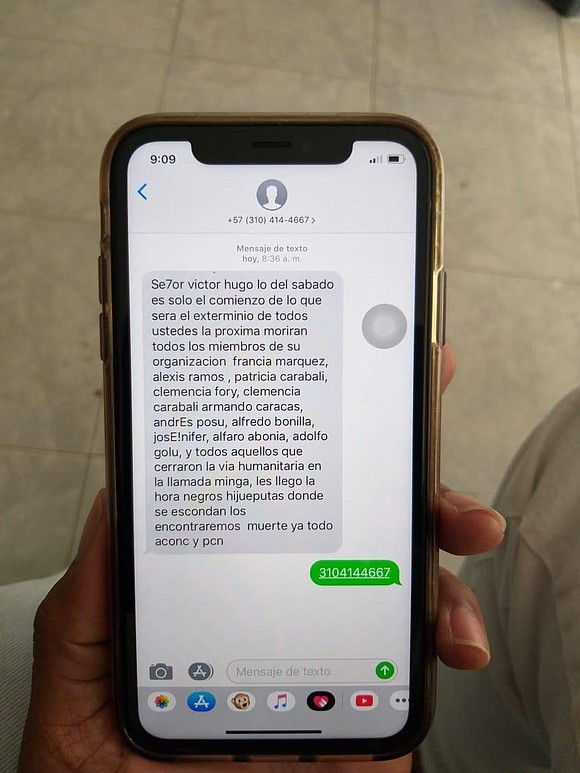 AfroColombian activists are facing threats to their lives, and they’re appealing to supporters around the world to help them get protection.

This past May 4, Afro-Colombian leaders meeting in the rural town of Santander de Quilichao in Cauca state ran for their lives to escape a grenade and gunfire attack. The group had come together to prepare for a May 8 meeting with the government of Colombia to discuss the progress of agreements between the government and community members after their last “Minga,” or national protest march, held in April.

While they were meeting in a building on a small farm, two armed men somehow made it through security checkpoints and at around 5.35 p.m. they began shooting. The gunfire sent activists running and searching for places to hide. Toward the end of the attack, which lasted some 15 minutes, a third militant showed up and threw a grenade.

The attack was meant to harm 16 people, members of the Black Communities Process (Proceso de Comunidades Negras, PCN), the Association of Afro-Colombian Community Councils, the Association of Afro-descendant Women of Northern Cauca and the Mobilization of Afro descendant Women for the Care of Life and Ancestral Territories (Mobilizacion de Mujeres Afrodescendientes por el Cuidado de la Vida y los Territorios Ancestrales). None of the 16 people meant to be harmed were injured, in fact only members of Colombia’s National Protection Unit (Unidad Nacional de Proteccion) were hurt.

Still, the attempt on the lives of Colombia’s Black leaders sent a disturbing message. One which, if they did not understand physically, was later emphasized in text messages sent directly to their cell phones: “what happened Saturday was only the beginning of the extermination of all,” stated a texted death threat May 6.

The 52-year Colombian civil war, which formally came to an end in November 2016, was mostly fought in rural areas like Chocó and Cauca. When Peace Accords were signed, promises to aid the people and areas that had suffered the most were also part of the deal. The 2016 Peace Accord included an agreement stipulating the implementation of an “Ethnic Chapter” which would lead to the dismantlement of illegal armed groups in rural areas and provide further protections for local communities. But the election of conservative President Iván Duque in June 2018 has led to a resurfacing of violence. Duque was elected based on his promises to change the 2016 Peace Accord, which he claims is too lenient on former guerrilla fighters accused of war crimes.

The Washington, D.C.-based advocacy organization, WOLA (Washington Office on Latin America) has published an appeal to the U.S. State Department, asking them to condemn the May 4 attack and the May 6 death threats. WOLA wants the U.S. to help with oversight into the investigation.

Their letter of appeal notes that, “Among those present were human rights activists Carlos Rosero, Francia Márquez, Clemencia Carabalí, Victor Hugo Mina and Sofia Garzon, international accompaniers and two children. Two bodyguards from Colombia’s National Protection Unit (Unidad Nacional de Proteccion UNP) who responded during the assault were injured. All these leaders were instrumental in guaranteeing the inclusion of the Ethnic Chapter in the 2016 Peace Accord between the Colombian state and the Revolutionary Armed Forces of Colombia (FARC).”

WOLA wants the State Department to encourage Colombia’s President Duque to move forward with implementation of the 2016 Peace Accord and its Ethnic Chapter. And they want Duque to have the attorney general of Colombia investigate the May 4 assault and the subsequent death threats.

President Duque has issued a statement decrying the assault and there has been an initial arrest of a young man who, authorities claim, has ties to the FARC. But Francia Márquez, the recipient of the 2018 Goldman Environmental Prize (known as the Nobel Prize for environmental activism) for her work against illegal mining in northern Cauca, is not yet happy with the governments’ response to the attack. She says she has received numerous threats from militant groups because of her work. Márquez is recorded as stating, “It’s not easy. Everyone comes into this world with a purpose. Everyone has a reason for being. In my heart, fighting for the rights of Black communities is my reason; for my rights as a afrodescendant woman, for our territories and for our lives. I believe I was created for this reason. I don’t know if I’ll die tomorrow or when I’ll die, but I’m at peace because I am doing what I want to do. I am used to doing work with the community. The message for leaders is that it’s not easy but it’s also not impossible. Someone has to be the leader.”