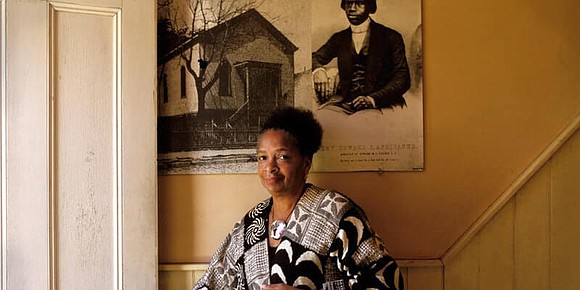 Two things necessitate a change in the usual pattern here of alternating between Black men and women. First, as I write this it’s Mother’s Day and second, the historic African-American haven Weeksville in Brooklyn is once again on the brink of being closed.

In 1827, after African slavery had been abolished in New York, James Weeks, a Black longshoreman, bought land from abolitionist Henry Thompson. Thompson had acquired the land after buying it from the wealthy Lefferts family and that set the stage for the heritage site. Soon, the site or hamlet attracted hundreds of Black Americans, free and many formerly in bondage. It was a community that provided a school, church, a newspaper and practically every vestige of a thriving neighborhood.

But more than a century later Weeksville was nearly forgotten until Brooklyn activists stepped in and began a movement to save and reaffirm the refuge, none more tireless than Joan Maynard.

According to recent stories, the Weeksville Heritage Center is threatened with closure given a shortfall of funds to sustain its operation. Well, where is the storied preservationist Maynard now that the center is facing a shutdown?

Unfortunately, Maynard died in 2006 at 77, ending her impressive record of community activism and self-determination.

Born Joan Cooper on Aug. 29, 1928, in Brooklyn, her father, John Cooper, was a ventriloquist and her mother, the former Julia St. Bernard, told stories about racist oppression. In her household, Joan was a witness to her parents’ talents and community endeavors. She was a graduate of Empire State College and worked as a commercial and graphic artist for the McGraw-Hill publishing company. Her illustrations and drawings were often featured on the cover of such publications as the NAACP’s CRISIS magazine and in her own depictions in comic books of African-American history.

The turbulence of the late 1960s in the nation provided a number of unintended consequences, many of them quite rewarding, including a renewed attention to Weeksville which had virtually been forgotten. With the “discovery” of a few small cottages on the edge of Crown Heights, activists pounced on the situation and determined that the cottages were the remaining vestiges of the historic site.

Joan led an initiative to not only protect the cottages but to renovate them and preserve them as part of the city’s African-American heritage. In this campaign, she often enlisted the help and support of schoolchildren and volunteers. In 1970, the cottages were designated city landmarks and later added to the National Register of Historic Places. She was the founding member of the Weeksville Society and later became president and executive director of the Society, overseeing the refurbishing of the houses.

By 2004, the renovation of the houses, at a cost of $3 million, was completed and they were subsequently opened to the public. Throughout the process, Joan was a dauntless steward, making sure things were done to specifications she and her members insisted on, so that they be done with dignity and the best enterprise. Even so, it wasn’t without its setbacks and adversity, including vandalism and severe damage caused by a car crashing into one of the buildings. Following these damaging incidents the homes had to be rebuilt, which again brought new challenges to Joan and her members. “She’s one of the strongest women I know. She was very focused on her goals and was the kind of person unafraid to move forward to make sure she met her challenges,” said Pamela Green, who succeeded Joan at the helm of the Society. Green said her vision and commitment to Weeksville was unwavering and she retained a desire to make sure there was a connection between the past and present, particularly for the younger people in the community. “By aiming our programs at young people, we can be part of the process of creating a generation that grows up without the misunderstandings that previous generations experienced,” Green added.