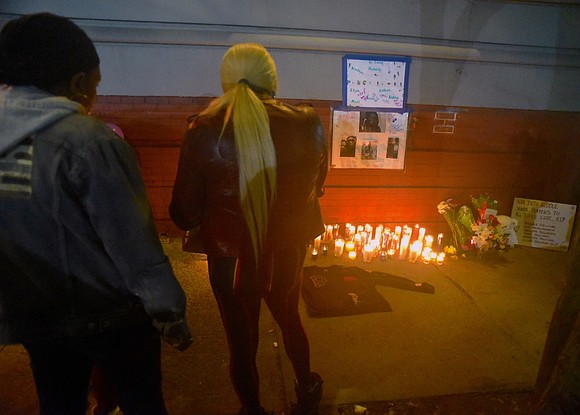 Tens of thousands of dollars in donations pour in a week after six people, including four children, were killed in an apartment fire in Harlem.

Tragedy struck May 8 when a fire ripped through the Frederick E. Samuel Apartments located at Adam Clayton Powell Boulevard on the corner of 143rd Street. Firefighters made the gruesome discovery of six bodies in a fifth floor apartment.

Andrea Pollidore, 45, and her four young children Nakyra, 11, Andre, 8, Brook-Lynn, 6, Elijah, 4, and 32-year-old stepson Mac Abdularaph all perished in what is one of the city’s deadliest fires in nearly two years.

A reported 100 firefighters responded to the scene to get the fire under control. FDNY officials said no smoke detectors were found. The family was trapped in a rear bedroom of the apartment and couldn’t get out.

Since the tragedy, family, friends and neighbors have held vigils in memory of the victims. On a GoFundMe page started by Pollidore’s sister, Kendra Pollidore-Mulzac, the family was just $2,600 short of their $45,000 goal. The funds will be used for funeral expenses. Donations from hundreds of people have ranged from $6,000 to just $5.

Pollidore-Mulzac described her sister as a woman who loved cooking, music and dancing. She had a passion for her work as a medical assistant. Pollidore-Mulzac said the children were happy and had lots of friends. The family was preparing to celebrate Nakyra’s 5th grade graduation next month along with her and Andre’s birthday in July.

“My nieces and nephews lit up any room with their smiles,energy, bright and bold personalities and overload of hugs and kisses once they saw you,” Pollidore-Mulzac said. “They were known and loved by many in the community where they lived and went to school.”

Last Saturday, the Rev. Al Sharpton hosted the victim’s family at the National Action Network’s weekly rally in Harlem. The organization donated a reported $6,000 in assistance.

“We are very grateful for the outpouring of support from all over the world actually,” said Pollidore-Mulzac. “We’re still in shock, it’s very difficult. We’re just trying to figure out how to navigate through this process one day at a time.”

Funeral arrangements had not yet been announced at press time.