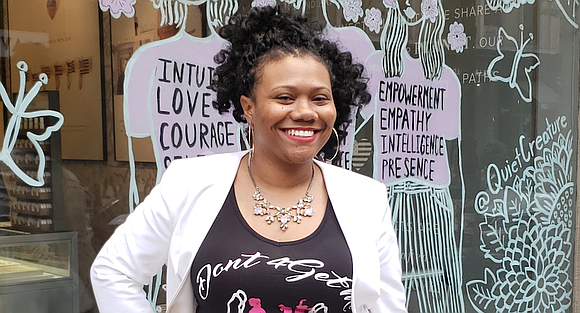 According to the Center for Disease Control, rates of teenage pregnancy have declined across all racial/ethnic groups since the 1990s, although the rates for Black teens are still more than twice the rate for white teens.

Simone Goss is on a mission to not only cut those numbers down, but also give support to teens who become pregnant while breaking the stigma. Goss is the CEO and founder of Don’t 4Get Me—The Frances Canty Foundation, a non-profit organization that works to mentor and support teen moms in the city.

“We really try to provide teen moms with the necessary resources that they need to be successful,” she said during a recent interview. “My goal is to let them know that they life isn’t over and you can do whatever you want to do.”

A native of Lefrak, Queens, Goss was raised in Harlem and became pregnant at age 15. She was also in the foster care system and was adopted by Frances Canty, the woman who she credits as making an instrumental impact on her life and her organization’s namesake.

“I just remember all of the things I didn’t have and all the things I didn’t know,” she said. “When you’re young, you don’t think about anything. My foster mother pushed me to go to school, get a job and helped me to be the best person I could possibly be.”

Today, Goss’ son is 21 years old and she’s married. She’s helped about 30 girls navigate their way through their pregnancy and lends support. Don’t 4GetMe offers mentoring and points teen moms in the right direction for clothing, food, housing and other social services.

Based in Brooklyn, the organization holds workshops and programs in different locations. Don’t 4Get Me has held a community baby shower for teen moms and a Christmas party for families in shelters. Goss recently gave a scholarship to one teen mom so that she could obtain training to become a certified nurse assistant and helped her with job placement.

Goss says that Don’t 4Get Me is a resource for teen moms, she’s not promoting teen pregnancy. The organization also offers preventative programs to educate teens about having children at a young age.

The success of reality TV shows like MTV’s “Teen Mom” and “16 and Pregnant” have somewhat glamorized teen pregnancy without showing the real struggles some young mothers go through like homelessness or having a sick child.

“We advocate safe sex and abstinance to teens,” she said. “The goal we want is for girls to not get pregnant. A lot of times teens get pregnant because they don’t feel 100 percent loved or they feel there’s something missing in their life. A lot of teens think they won’t get pregnant or they think that having a baby isn’t going to be hard.”

But what about the parents? Goss’ advice for families struggling with the news of a pregnant teen can be tough but she says it starts by not self-blaming.

“I tell parents that most of the time it’s not their fault.” she said. “It’s OK to be upset and cry and be angry. As a parent, this is probably where your child will most need you. Dry your tears and come with a game plan.”

To get connected with Goss and Don’t 4Get Me—The Frances Canty Foundation go to www.dont4getme.org, Facebook at www.facebook.com/dont4getmefcf or call 917-753-7919.