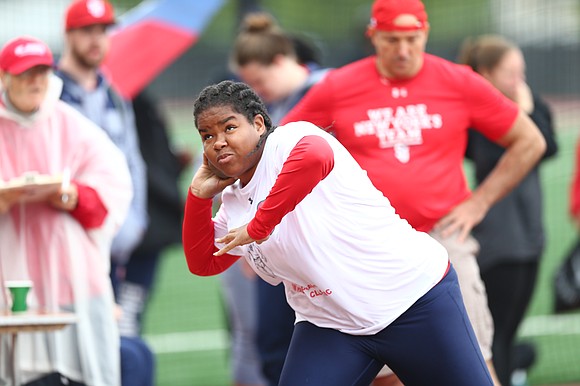 There were 11 medals total and five first-place finishes at the Big East Outdoor Track & Field Championships for the athletes of St. John’s University. Two of the gold medals went to sophomore sprinter Leah Anderson, who dominated the 200-meter and 400-meter dashes and earned Big East Women’s Most Outstanding Track Performer.

The Red Storm also showed its talents in the throwing events with senior Jennifer Odoemene placing first in the discus and second in the hammer throw. Junior Amarys Berry captured the shot put title. The previous week Berry won the shot put at the Tom Farrell Classic.

“Usually, my main focus when I go to meets is always to beat myself rather than other competitors,” said Berry, who is always striving for a personal best. She achieved that at the Big East Championship, posting a 14.96-meter mark.

Berry got into the throwing events in high school when she gravitated toward the field part of track and field and showed almost immediate talent in the shot put. The successes that Berry is now having are especially sweet after missing her freshman year of college due to a torn ACL. It took a while to recover and get back into a full training routine. This year she found things really clicking.

“I’m getting back into it,” said Berry, who also won the Big East Indoor title. “Getting that mentality back. I know I have to keep going.”

A hospitality management major who has placed on the Academic Honor Roll, Berry envisions working in a hotel’s banquet section to start her career. She also has an eye on entrepreneurship. The medium size of the university is a good fit for Berry. The sisterhood of the track and field team and the astute coaches at St. John’s have been good for her athletically and academically.

“They’re willing to help you out with everything—especially academics and sports and managing it all,” said Berry, a New Jersey native whose family has come to many meets in the area.

Heading into the Big East Championships, Berry was hoping to throw at least a 48-footer and she surpassed that at over 49 feet. Her season now complete, she feels a sense of satisfaction for a job well done. Other athletes advance to the NCAA Division I East Regional Championships next week. Names will be announced shortly.