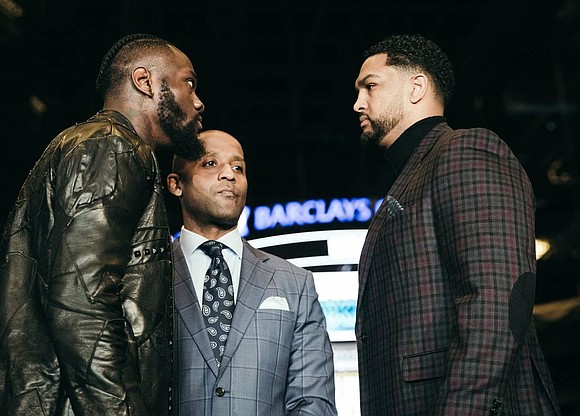 Wilder, 40 wins, no losses, 1 draw, 39 knockouts, from Tuscaloosa, Ala., last fought in December 2018, two months after his 33rd birthday, at Staples Center to that one draw on his record, a 12-round split decision, retaining his title against Tyson Fury.

Wilder, who has an 83-inch reach and is 6-foot-7, was less accurate in this fight than he’d been in previous ones being outscored by Fury in nine of the 12 rounds. Both Wilder and Fury only landed double digits in four separate rounds, but Wilder was able to drop Fury twice, first in round nine with a short left hook followed by an overhand right, and again in the 12th with a right-left combination flattening Fury to the canvas, down on his back.

Breazeale, from Glendale, Calif., also 33 and 6-foot-7, has an 81- and a half-inch reach, 20 wins, 1 loss with 18 KOs. He last fought December 18, last year, a non-title fight against Carlos Negron, a ninth round knockout at Barclays. Negron was hit with a right hand to the back of the head at the 1:37 mark causing the referee to stop the fight.

Wilder is anxious to get into the ring and not too thrilled about Breazeale as a person.

“He’s like a fly in my ear,” said Wilder, who’s promising a knockout. “I’m going to get him out of there in a fashion no one has ever seen.”

Wilder weighed into his last fight at 222 pounds and is expected to weigh in at about the same at tomorrow’s weigh-in. Breazeale is expected to come in around 255. They both have unorthodox boxing styles and knockout power.

Breazeale’s motivation for getting into the ring is with the intent of punishing Wilder. It derives from a situation that he describes from two years ago when Wilder and his brother, who’s also a boxer, confronted him in front of his family in the lobby of a hotel.

“Wilder approached myself and my wife and kids. It was a situation that was not boxing related,” Breazeale explained. “Knocking out Deontay Wilder is a lot bigger than just an actual win or KO on any other given night. It’s been the biggest motivational tool.”