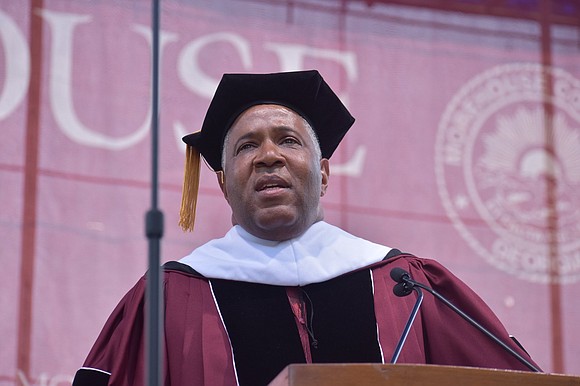 Shock and praise continue after Black billionaire Robert F. Smith surprised the 400 students in Morehouse College’s class of 2019 by telling them that he would pay their student loans totaling an estimated $40 million.

“On behalf of the eight generations of my family that have been in this country, we’re gonna put a little fuel in your bus,” Smith said. “My family is going to create a grant to eliminate your student loans.”

Students at the all-male historically Black college, along with school administrators, can be seen jumping out of their seats and cheering. Video of the moment has since gone viral getting hundreds of thousands of views. The young men can also be heard chanting “MVP” for Most Valuable Philanthropist.

Morehouse College president Dr. David A. Thomas said in one interview that the announcement was a surprise to him.

“I had no idea,” he said. “The students turned to each other and said ‘What did he say?’ This will allow them to pursue their dreams.”

Smith is the founder, chairman and CEO of Vista Equity Partners. Forbes lists him as having a net worth of nearly $5 billion making him the nation’s wealthiest African-American.

His firm is an international leader in software and technology investments that currently manages equity capital commitments of more than $46 billion and oversees a portfolio of more than 50 software companies employing 60,000 people worldwide.

University officials, who were unaware of Smith’s gift prior to selecting him, said he was chosen as this year’s commencement speaker because of “his inspirational journey as a visionary entrepreneur and scholar.”

“I can delete that spreadsheet,” Morehouse graduate Aaron Mitchom said in a published interview. “I don’t have to live off of peanut butter and jelly sandwiches. I was shocked. My heart dropped. We all cried. In the moment it was like a burden had been taken off.”

Prior to announcing to pay off the graduates student debts, Smith made a $1.5 million gift to the school earlier this year to fund endowed scholarships and the design and creation of a park that will give students a new outdoor study area.

He also donated $560,000 to purchase land for and build a park in Southwest Atlanta. The new park will be adjacent to the Ray Charles Performing Arts Center on Morehouse’s campus. The college will engage students and alumni in the design and naming of the park.