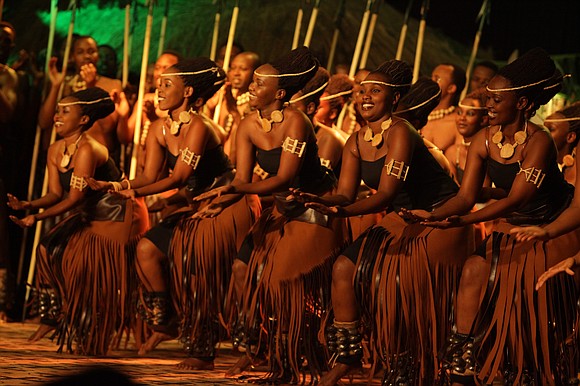 Abdel Salaam, artistic director of BAM’S DanceAfrica, has announced that when the 42-year-old festival, founded by the late Baba Chuck Davis, returns to the Brooklyn Academy of Music on Memorial Day weekend (May 24 - 27) it will highlight a dramatic international story of rebirth, reconciliation and transformation in the African nation of Rwanda.

“For this country to come back from a civil war marked by horrific genocide and now, 25 years later, rise like a phoenix from the ashes of that disaster is a tremendous political message for all of us,” said Salaam during a recent interview. After a trip to Rwanda, last year, to see its best internationally known dance companies, Salaam invited Inganzo Ngari to participate in DanceAfrica2019. With this company at the center of a diverse and exciting program, the festival highlights the indomitable spirit of unity personified by this small Central and East African nation that dominated international news when over 1 million members of the Tutsi tribe were massacred in over a three-month period in the 1990s.

Since peace and reconciliation began in the early 2000s, Rwanda has changed and this year’s DanceAfrica celebrates its remarkable rebirth and reconciliation. “When we visited Rwanda last year,” Salaam said, “everywhere we went, Rwandans no longer divided themselves as Hutus, Tutsis or Twas, the three major tribes. They are now just Rwandans.” When a significant number of dancers and drummers from the 100-member Rwandan troupe Inganzo Ngari makes its U.S. debut at BAM’s DanceAfrica, it will reflect this newfound spirit of unity, says Artistic Director Serge Nahimana.

“We created this troupe to promote our culture because before it was seen as something without value. And, because of the genocide our culture, too, was dying,” Nahimana says. Culture reflects the soul of a people and Nahimana says, “Now, our music and dance are something we feel compelled to do. Now the children study our music and dance and take pride in their culture.”

Dance is not an abstract expression of art-for-arts sake; it carries a message of survival for this once war-torn nation. Nahimana was only seven-years-old at the time of the Rwandan genocide and while he managed to flee with his uncle to Uganda, he lost his father. Now, with Inganzo Ngari he says, “We have created something that tells the story of the history of Rwanda, the story of life before the genocide and the story of reconciliation and rebirth.” It is not an easy story to share, but it is, he says, one that must be told. And, Salaam adds, it is a story Americans can learn from. Salaam has divided the program into two parts. A performance by the Spirit Walkers, Salaam’s troupe, will capture the darkness of the war and the Rwandan company will reflect the rebirth and renewal that followed reconciliation.

As with previous DanceAfrica programs, this year’s seeks to blend thrilling performances and thought-provoking content that together leave audiences with an uplifting afterglow. Salaam’s African aesthetic highlights that aspect of diaspora dance that is like a golden thread linking life’s pivotal moments and weaving connections that reinforce a sense of community. Rwanda’s Inganzo Ngari is a perfect example of this.

While this brand of entertainment and education is so appropriate for the world we live in, it can throw some dance writers/critics off balance revealing their inclination to view African music and dance like cultural tourists armed with more preconceived notions than facts. But anyone familiar with DanceAfrica knows it has always reminded us that African-inflected culture is not a color-by-the-numbers affair. It is with that in mind that those attending DanceAfrica—where all are welcome—must be open-minded and expect

In the spirit of celebrating Rwanda’s rebirth, several new elements have been created for this upcoming DanceAfrica festival. They include spoken words performed by actor and poetess, Rwandan-born Malaika Uwamahoro as part of the Opera House show; an interactive “DanceAfrica Portal” to Kigali; and a RadioBook Rwanda reading and discussion. A visual art exhibition and FilmAfrica with several contemporary Rwandan films round out DanceAfrica. Of course, many beloved and long-held DanceAfrica traditions also return, including the Tribute to Ancestors, the Community Day, the Outdoor Bazaar, and the late night dance party, all free to the public.

The one thing that Baba Chuck, DanceAfrica’s founder, taught the millions of hearts and souls he touched over the years, a tradition Salaam continues, is that the entire DanceAfrica festival unites all who attend into a community that joyously celebrates our shared humanity. In 2019 it seems that the