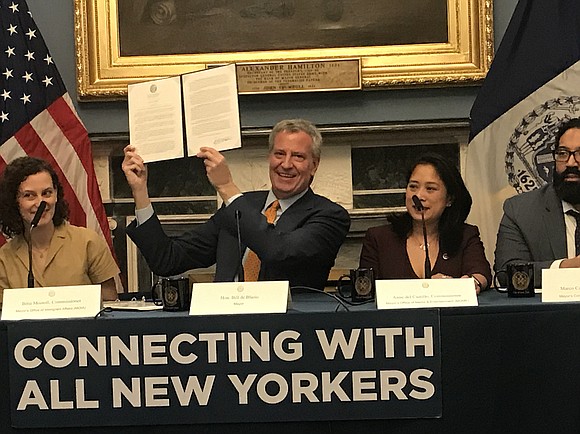 With the stroke of a pen, Mayor Bill de Blasio increased the advertising revenue for ethnic and community media, directing city agencies to spend at least 50 percent of their annual print and digital publication advertising budget on the targeted media outlets.

The executive order was signed Wednesday, May 22, during a meeting with leaders from 20 targeted publications and news websites, including the New York Amsterdam News.

The executive order becomes effective beginning in Fiscal Year 2020. Agencies will submit a year-end data report to the Mayor’s Office of Operations regarding the agency’s annual print and digital publication advertising spending. Data on each agency’s annual print and digital publication advertising will be made available to the public through the Open Data portal at the beginning of each fiscal year beginning in Fiscal Year 2021.

“We can’t be the fairest big city in America if only some people know how to receive city services,” said de Blasio. “Community and ethnic media outlets are critical for delivering news across the city. This executive order will help us reach more New Yorkers, ensuring that more people can benefit from all the city has to offer.”

“Smaller-scale media outlets play an integral role in Queens—the most diverse borough—and throughout the entire city,” said Comrie. “Immigrant communities, non-English speakers, low income communities, and others that rely on these community-specific and ethnic publications will gain greater exposure to critical information from our city government because of this executive order. Our city’s strength lies in our diversity.”