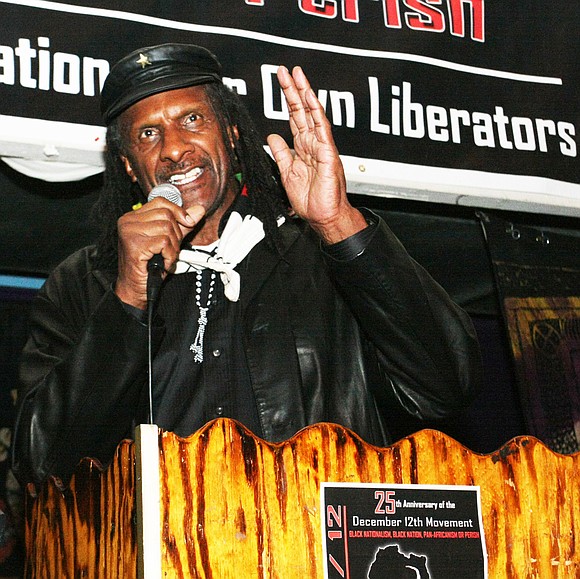 Coltrane Chimurenga, field marshal of the December 12th Movement, joined the ancestors May 13, 2019. Chimurenga, a founding member of the Movement and a committed Pan-Africanist, devoted his life to the liberation of Black people.

Chimurenga grew up in California. During the 1960s, at the height of the Black Power Movement, Chim organized the College for Struggle in Oakland, California and then taught at San Francisco State, which had developed the first Black Studies Program in the United States. While there he met Cde Tirivavi Kangai, a Zimbabwean diplomat, who gave him his name, Chimurenga. Chim was a key organizer of the West Coast rally for the first African Liberation Day demonstrations held in Washington, D.C., San Francisco and the Caribbean in May 1972.

While continuing his political organizing, Chim earned a master’s degree in education from Harvard University and began work on a doctorate in business. During that time, Chim was a leading cadre of the African People’s Party and the principal organizer of the defense committee formed when its Chairperson Muhammad Ahmed was arrested for his political activities. In that capacity he traveled throughout the U.S. garnering support against government repression.

In the 1980s, Chimurenga again moved to the East Coast where he helped organize the New Afrikan Freedom Fighters. The NAFF formed a defense committee for the comrades arrested in connection with the 1979 liberation of political prisoner Assata Shakur from her incarceration in New Jersey and with the 1981 expropriation of funds from a Brinks truck in Nyack, N.Y.  During that time he began working closely with a group of Black revolutionaries called the Sunrise Collective. The work they did in defense of these political prisoners and prisoners of war, as well as their work in organizing the Black community in defense of its human rights, brought them under the intense scrutiny of the FBI.

The massive FBI surveillance led to their false arrests in 1984 by 500 law enforcement agents in a case that came to be known as the New York 8+ Against Fascist Terrorism. It was a political trial that backfired on U.S. Attorney Rudolph Giuliani by exposing the illegal surveillance of political activists by the U.S. government and led to its defeat at trial.

Following the NY8+ victory, Chimurenga co-founded the Black Men’s Movement Against Crack with Abubadika Sonny Carson and Viola Plummer.  The BMMAC organized the Black community to be self-determining and to close the crack houses by every means necessary.

In 1987, community leaders, Viola Plummer, Sonny Abubadika Carson, Elombe Brath, Fr. Lawrence Lucas and Chimurenga formed the December 12th Movement in response to the increased murders and attacks on Black people across New York state by the police and white supremacists. Under the leadership of Chimurenga, D12 organized “Days of Outrage” whose creative and precise street strategy and tactics continually frustrated the police and brought New York City to a standstill. Chimurenga was a leader who, while carrying out brilliant street actions, did everything possible to ensure the safety of the masses that marched with D12. It was leadership like this that earned him the title “Field Marshal.”