Game on! Liberty heads into the 2019 season 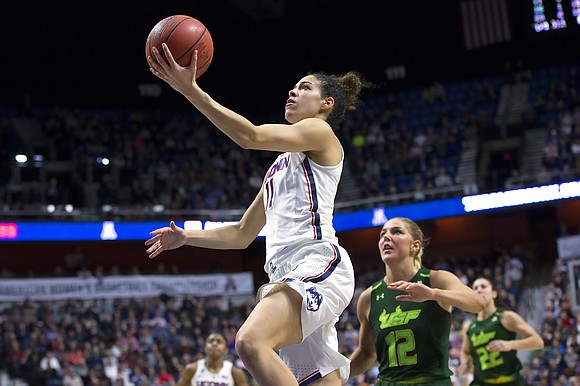 After a jubilant debut at Barclays Center, New York Liberty results for the rest of preseason have not been so positive. There were three losses, two coming against the Connecticut Sun, a team that’s settling into a new lineup following the trade of Chiney Ogwumike to the Los Angeles Sparks. True, preseason is a time to try out new players to see who will earn a roster spot, but it’s also when teammates regain their rhythm after a long off-season spent playing overseas or resting, training and working on other projects.

There are some obvious things about the Liberty beyond Tina Charles still being the team’s epicenter. Kia Nurse is showing all the great ingredients that took her to four Final Fours during her time at University of Connecticut. Australian player Rebecca Allen, in her fifth season with the team, has been playing extremely well. Post player Amanda Zahui B, who came to the Liberty via a trade in 2016, is also looking strong.

Rookie Asia Durr should deliver solid results. Following the Liberty’s final preseason game head coach Katie Smith said of Durr, “I thought that she stepped up against Atlanta and tonight she even did more. She’s got it in her. She’s a very capable scorer and a facilitator in a lot of ways. Happy with her progression and excited to see where she’ll go.”

As is the way in the WNBA, some players arrive late due to their overseas commitments. That is the case with Liberty guard Bria Hartley and forward Kiah Stokes. Both are due before the season-opener. To make room for their arrival, Bronx native Bianca Cuevas-Moore, UConn alum Kelly Faris and third-round draft pick Megan Huff were waived on Monday.

In the midst of all the new names in training camp, people may have missed that two NYC locals, Epiphanny Prince and Kia Vaughn, aren’t on the roster. Both are unrestricted free agents and aren’t signed for 2019.

WNBA rosters need to be finalized on May 23 and regular season play kicks off on May 24. The Liberty plays its home opener that evening at Westchester County Center against the Indiana Fever.