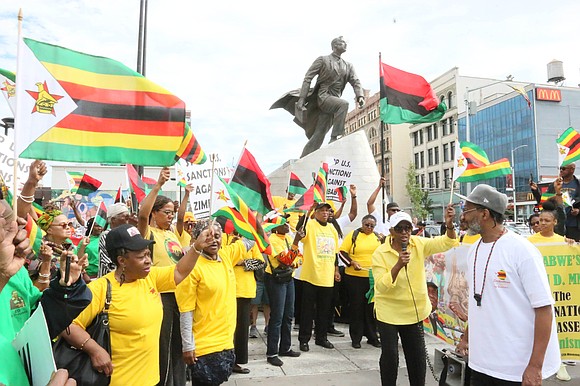 “On Saturday, May 25, African Liberation Day, the streets of Washington, D.C. will echo to the thunder of voices of hundreds of people marching to the White House,” said December 12th Movement member Iman Essiet at a press conference last week in Washington, D.C. She went on to state that “a national coalition of organizations and individuals, led by the December 12th Movement and the Friends of Zimbabwe, will demand that President Trump lift the racist economic sanctions daily killing scores of children and adults in Zimbabwe.”

D12’s Omowale Clay elaborated, “Nearly two decades ago, the U.S. passed the Zimbabwe Democracy and Economic Recovery Act of 2001 [ZIDERA] to punish Zimbabwe for having had the audacity to return to its people the land stolen by white colonial settlers. The goals of the sanctions imposed by ZIDERA were to make the Zimbabwean economy ‘scream’—to make conditions so bad for the masses of the people that they would overthrow the ZANU-PF-led government and stop the confiscation of land from white settlers. President Trump has just renewed the sanctions for another year.”

Salim Adofo, chair of the D.C. chapter of the National Black United Front, stated, “Black people in the U.S. must make it crystal clear to President Trump and to the Congressional Black Caucus, which has co-signed ZIDERA, that these killer sanctions have to end now.”

Essiet announced, “For those interested in traveling to D.C. by bus with the December 12th Movement, call 718-398-1766. For those from or traveling on their own to D.C., we will gather at 12 noon at the African-American Civil War Veterans Memorial Plaza at Vermont Avenue and U Street, NW. [U Street/Cardozo Metro Station] and begin our march to the White House at 1 p.m. We will rally in front of the White House on 1600 Pennsylvania Avenue from 2 p.m. to 4 p.m.”