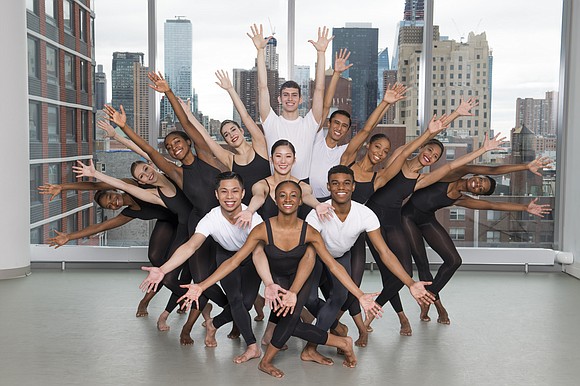 On Thursday, June 13, the centerpiece of Alvin Ailey American Dance Theater’s Lincoln Center engagement will be The Ailey Spirit gala, which launches the 50th anniversary celebration of The Ailey School. The evening’s honorary chair is award-winning actress Lorraine Toussaint, star in NBC’s “The Village,” Netflix’s “She-Ra and the Princesses of Power,” AMC’s “Into the Badlands,” and the recently released supernatural thriller “Fast Color” and also the proud parent of a student at The Ailey School.

Lighting up the gala will be a one-night-only performance that is bound to bring down the house as it brings together former AileyCampers from New York and Newark, talented students from The Ailey School, rising stars of Ailey II, and the incomparable members of the Alvin Ailey American Dance Theater. All come together to pay tribute to the school’s impact in a work choreographed by Ailey II Artistic Director Troy Powell.

The piece d’occasion follows the story of a young boy from an Arts In Education program to the Company, which parallels the inspiring journeys of Powell—who was discovered by Mr. Ailey at an outreach activity at age 9 and awarded a scholarship to The Ailey School, before dancing with both companies and later leading the junior company—and Ailey dancer Solomon Dumas, who was introduced to dance at AileyCamp Chicago and has participated in all parts of the organization. The program’s Revelations finale will be followed by a festive soirée that takes place on the promenade with dancing to the spinning of DJ M.O.S.

Inman could barely contain his excitement about the upcoming celebration when, during a recent interview, he said, “The fact that we’re still here and thriving really demonstrates the importance of the training that Mr. Ailey believed, training that doesn’t pigeon-hole the artist as a ballet dancer or a modern dancer but trains them to be a dancer and one who believes that dance comes from the people and must be given back to the people.”

Inman himself is a product of the Ailey School. “I came to the Ailey School in the early 1980s from Washington, D.C. The thing that stood out to me when I got here was all these phenomenal, well-trained, finely tuned dancers’ bodies. I was 21 and felt so blessed to be in that space with such talented, disciplined and driven artists.

“I studied Horton, Graham, ballet, West African, Dunham, basically the same thing we’re doing now. We’re also really engaged with contemporary dance and improvisation and other skills that provide dancers with key tools they need nowadays. But, I think the core curriculum then is the same as it is now. Mr. Ailey liked dancers with a ballet bottom and a modern top that had that fluidity in their torso and those really sharp and clean leg lines that a ballet dancer can achieve.”

Inman also pointed to the tremendous outlets for dancers as their technical proficiency and artistry progress. “I was also in Ailey II at one point when Mr. Ailey came in and rehearsed with us and watched us work on ‘Blues Suite.’ It had a tremendous impact on us to be in the same space as this legend. Sometimes he’d even invite us students into the studio to watch the AAADT company rehearse. It was amazing to see him working with those dancers. It helped feed our desire to really do well, work hard and gave us something to look forward to.” Now, Inman says, similar opportunities continue to give young students at The Ailey School a sense of the path they have chosen to follow.

Now that he is co-director of the school, Inman says he finds himself modeling the way he interacts with Ailey students after what he saw Mr. Ailey do. “In terms of interactions being open and really understanding the students and their needs and the difficulty in what we’re asking them to do, being in New York and the sensitivity to the human spirit, all contributes to the longevity to not only the institution but to what we stand for.”

The organization has truly grown. “The school of course has grown tremendously. We now have the space to accommodate a larger student body. We have 89 programs. The international student body has grown over the years. And, we have Ailey Athletic Boys and the Professional Division, the Ailey/Fordham BFA Program, the Certificate program, scholarships. All of those programs have grown exponentially and I think we can attribute that to really understanding the value of what The Ailey School offers, as well as the depth of Mr. Ailey’s vision.

“It’s amazing when you think about the vision Alvin Ailey had for a school to train dancers for his company because at the time, none of the modern dance companies had a program with the depth and breadth of what he envisioned 50 years ago and which has materialized thanks to the brilliance of Artistic Director Emerita Judith Jamison, former school head, the late Denise Jefferson and the current Co-Directors Melanie Person and Tracey Inman.”

Noting just how far ahead of his times Ailey was, Inman notes, “I think this current focus on diversity and the need to be inclusive is something Mr. Ailey was doing way back when. He has always been inclusive and has always thought of diversity and of the need to give women a platform to choreograph as well as to be movers and shakers in administrative and other capacities.”

“All you have to do is look at the former Ailey School alumni remaining close to home and setting new works on students, or those who have forged successful careers around the globe in education, concert and commercial dance, Broadway, film and television. Not only was Inman, himself, a member of Ailey II and Alvin Ailey American Dance Theater, he currently serves as a consultant and choreographer for the TV show ‘Pose’ on FX, but other alumni working on exciting projects include Ailey/Fordham BFA graduate Marija Abney, who recently appeared in the Academy Award-winning film “Black Panther,” and former Ailey II dancer and Ailey/Fordham University BFA graduate Ephraim Sykes who has received a 2019 Tony nomination for his role in the new musical ‘Ain’t Too Proud,’ and Beyoncé’s dance captain is a one of our former students, and 70 percent of the AAADT comes from The Ailey School,” Inman adds. “It’s amazing how this training really prepares you for anything and I think that, for me, is what I found to be unique about this. As long as you take the training by the reigns and make it work. Yeah. It prepares you to be a triple or quadruple threat.”