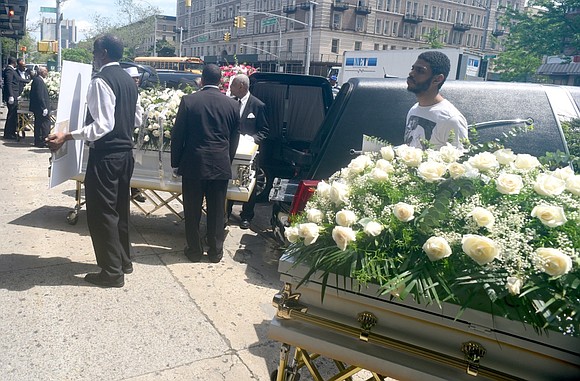 Family members and the community recently came together to lay to rest five of the victims of a fatal fire in Harlem.

The memorial service was held at First Corinthian Baptist Church for Andrea Pollidore, 45, and her four young children Nakyra, 11, Andre, 8, Brook-Lynn, 6, and Elijah, 4. The family perished in what is one of the city’s deadliest fires in nearly two years.

Tragedy struck on May 8 when a fire ripped through the Frederick E. Samuel Apartments located on Adam Clayton Powell Boulevard at the corner of 143rd Street. Firefighters made the gruesome discovery of six bodies in the fifth floor apartment.

A reported 100 firefighters responded to the scene to get the fire under control. FDNY officials said no smoke detectors were found. The family was trapped in a rear bedroom of the apartment and couldn’t get out. Another victim, 32-year-old stepson Mac Abdularaph, also died in the fire.

Tens of thousands of dollars in donations poured in a week after the fire via a GoFundMe page started by Pollidore’s sister, Kendra Pollidore-Mulzac. Funds were used for funeral expenses. Donations from hundreds of people have ranged from $6,000 to just $5.

The Rev. Al Sharpton hosted the victim’s family at the National Action Network’s weekly rally in Harlem. The organization donated a reported $6,000 in assistance.