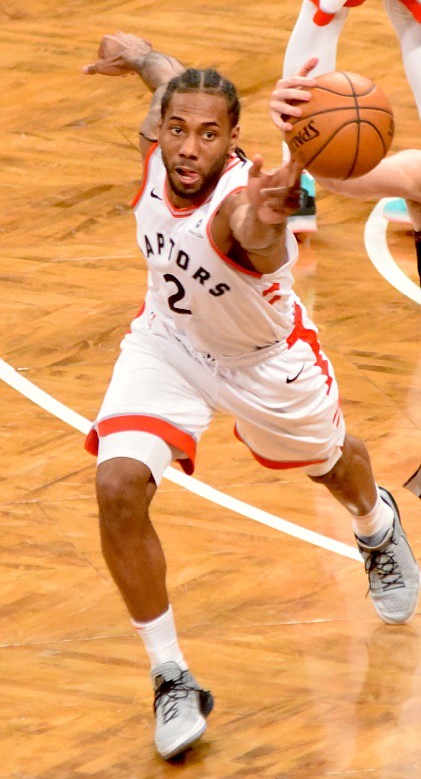 The Raptors’ hopes of upsetting the favored Warriors are dependent not so much on the uncertain status of Warriors forward Kevin Durant, who is out for Game 1 and questionable to play at all in the series as he recovers from a right calf strain sustained May 8 against the Houston Rockets in the second round of the playoffs. The Raptors’ prospects rest primarily on the broad shoulders of their superlative forward Kawhi Leonard.

Leonard has been spectacular this postseason. He engineered a performance as good as any player in recent playoff memory in the Raptors’ 4-2 series victory over the Milwaukee Bucks in the Eastern Conference Finals. Leonard, who will turn 28 June 29, averaged 29.8 points and 9.5 rebounds, and was outstanding on the defensive end of the court in leading his team to four consecutive wins after they fell behind 0-2.

Before the start of the playoffs, with obscured perspective, the basketball world seemingly forgot that Leonard is arguably the best player in the game. After playing only nine games last season, he essentially forced a trade from the San Antonio Spurs last July after he and the Spurs management, which includes head coach Gregg Popovich, experienced irreconcilable issues over the diagnosis of a right quad injury.

The Spurs believed it wasn’t as prohibitive as Leonard expressed. It resulted in a contentious ending to his career as a Spur, with whom he won the NBA title in 2014 versus LeBron James and the Miami Heat and was the Finals MVP.

The Toronto Raptors, led by Masai Ujiri, the franchise’s president of basketball operations, took a risk in acquiring Leonard with only one year remaining on his contract, trading among others All-Star guard DeMar DeRozan, one of the city of Toronto’s most beloved sports figures. Although Leonard may leave the Raptors in free-agency this summer, the gamble has thus far paid off.

“We’re a humble family and we’re just enjoying the moment,” said Leonard’s uncle Dennis Robertson, who Yahoo characterized as his primary career and business strategist, in an interview with Yahoo Sports last Sunday a day after the Raptors closed out the Bucks.

“Most people would say it’s vindication, but I’m not sure about that. But it was nice that we kept our mouths shut and just let everything play out…That’s what stars do…

“I think it just became a lack of trust,” Robertson added regarding the situation with the Spurs. “They didn’t believe Kawhi couldn’t play and that caused a lack of trust in us and then us not believing in them.”

The Raptors believed in him and in turn Leonard rewarded them. But the Warriors present problems they have yet to encounter this postseason. With Stephen Curry, Klay Thompson, Draymond Green et al., the Warriors’ balance and experience will earn them a 4-2 win.