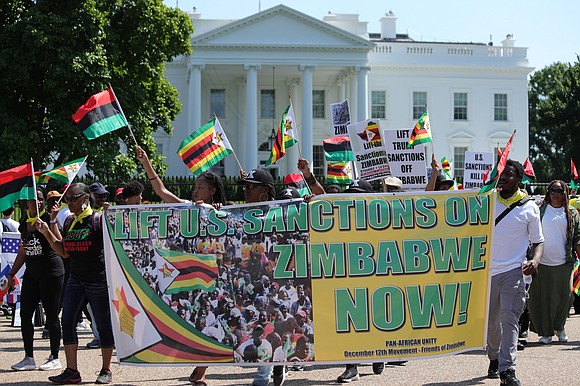 African Liberation Day, Saturday, May 25, proved to be a tremendous victory for “we who believe in freedom and cannot rest.”  The December 12th Movement led the march and rally to the White House to demand the lifting of the illegal United States economic sanctions against Zimbabwe. They gathered at the African-American Civil War Museum in Washington, D.C. and were joined in solidarity by the Friends of Zimbabwe NYC, the Committee to Eliminate Media Offensive to African People, Friends and Family of Mumia Abu Jamal, International Action Center, Workers World, African Diaspora for Democracy and Development, and many others, including a multitude of concerned individuals from New York City, New Jersey, Pennsylvania, Maryland, and D.C.

For nearly two decades the people of Zimbabwe have suffered under the racist U.S. sanctions imposed solely to punish them for exercising their right to self-determination in returning land stolen by European colonizers to the indigenous citizens of their country.

“We have come to the White House to put Mr. Trump on notice. But more importantly, we are petitioning the Congressional Black Caucus to return to its roots and, in the tradition of the late Congressmen Ron Dellums and Charles Diggs, to fight for the interests of Black people at home and abroad. Specifically, we urgently request the Congressional Black Caucus to introduce legislation to repeal the Zimbabwe Democracy and Economic Recovery Act 2001,” said December 12th Movement spokesman, Omowale Clay.

The impact of U.S. sanctions have caused: blocked access to international and bilateral commerce and loans; shortages of medicines and medical supplies; inability to purchase water treatment chemicals and mechanical parts; increases in cholera and diabetes; significant deterioration of Zimbabwe’s balance of payments position; blockage to international access credit markets; lack of medical treatment of and screening for HIV/AIDS; declining external budgetary support; Zimbabwe’s deficit has largely been financed from domestic borrowing which has triggered high inflation; a radical decrease in life expectancy; and an historic increase in unemployment which ultimately hurts the overall quality of living.

International human rights attorney Roger Wareham stated, “Despite the devastating impact of the sanctions, Zimbabweans have continuously supported their democratically elected leadership and land reform policies. The United States sanctions violate international law and the United Nations Charter in its blatant interference in the internal affairs of a sovereign nation. A land-locked, developing African nation like Zimbabwe, of 16 million people, poses no threat to the ‘National Security’ of the United States. Land is the basis of independence. Zimbabwe will never be a colony again!”