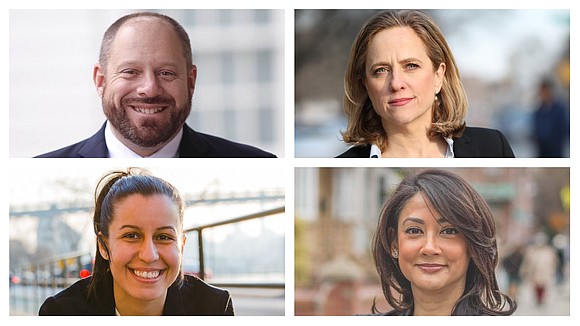 With millions of dollars being poured into this race, the candidates (outwardly) all desire to do similar things in office. Two things that all of the candidates have in common? The desire to reform the criminal justice system and the recognition of racial bias in said system.

New York City Council Rory Lancman, whose been endorsed by the likes of RWDSU, Bricklayers & Allied Craftworkers Local Union #1 and Gwen Carr (the mother of Eric Garner), told the AmNews that he’s running because the criminal justice system is racist and discriminates against poor people, working people, women and immigrants. He also said that the system doesn’t protect homeowners and tenants enough.

“That's why in the City Council, where I chair the committee that oversees the city's 5 District Attorneys, through the laws that I've passed, the funding that I have appropriated, and the hearings that I've held, I have directly attacked the over policing and mass incarceration of communities of color; the evils of cash bail; the criminalization of mental illness, addiction, and poverty; the targeting of immigrants; police misconduct; wrongful convictions; and the abuse of women,” said Lancman. “For nearly two decades before I entered public office, I represented women who were sexually harassed, people who were discriminated against on the job because of their race, working people who were cheated out of their wages, and those who were injured and sometimes killed on the job because their employer cut corners on safety.”

Queens Borough President, and one of the front runners in the race, Melinda Katz told the AmNews that her borough needs to be part of the change in the criminal justice system. She also said she’d be the only candidate to walk in with relationships with community leaders around the borough and diversify the office staff to make it look more like Queens.

“We need to end mass incarceration, get rid of cash bail, and stop marijuana arrests but that’s just the beginning,” said Katz. “We can stop gun violence by funding Cure Violence programs. We need to provide more treatment and alternatives to incarceration instead of jail, and then help people get back on track after they’ve been in jail by providing re-entry services and sealing old convictions. To make this happen, we need a DA who knows how to run a boroughwide office, and I'm the only candidate with experience managing a multimillion dollar budget and a large staff that serves all of Queens.”

Katz’s been endorsed by unions like 32BJ SEIU, CWA Local 1180 and the Uniformed Firefighters Association of Greater New York, organizations like the National Organization for Women – NYC and Brooklyn-Queens and the Queens County Democratic Party and elected officials like Rep. Greg Meeks and Bronx Borough President Ruben Diaz, Jr.