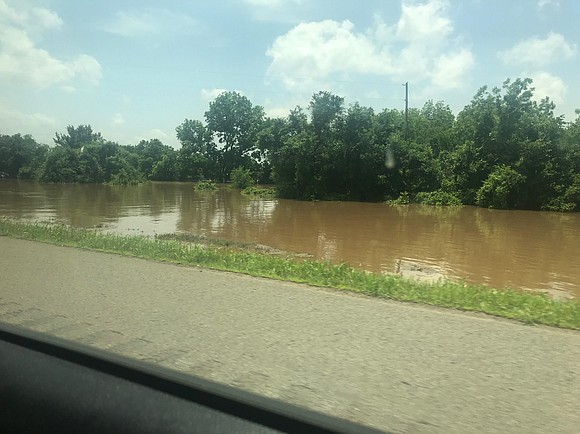 Despite news of tornados raging across the state of Oklahoma, my wife and I did not suspend our annual Memorial Day trip there to tend the gravesites of her relatives. Our mission was only partially successful.

While we were able to visit the cemetery in Taft, where my wife was born and spent her early years, and where her mother and father are buried, we were not able to make the trip to the Fort Gibson National Cemetery, the resting place of her brother-in-law. With her nephew at the wheel, we tried several roads to get to our destination, each one closed.

No matter where we turned we were surrounded by huge lakes cresting on both sides of the road, and it was hard not to think of the flooded nearby towns of Bragg and other parts of Muskogee County completely inundated.

Our frustration was nothing compared to other parts of the state such as El Reno that had been devastated by a tornado the following day. We were in a hotel in Muskogee when the alarms announced an impending tornado with many of the residents being escorted to shelters.

That morning we prepared for our trip back to Oklahoma City and the ominous clouds of previous days gave way to sunshine and calm.

Even so, as we made the more than two hour drive, my mind drifted back five years ago when I traveled to Moore where a tornado was so destructive that President Obama toured the town. Acres of land were torn asunder by a series of tornados and I was relieved to see that similar scenes were not present now.

Back in New York City, we read where there was still the danger of tornados and that over several days of ravaging storms and high winds six people had been killed and hundreds injured. Only a day after Memorial Day celebrations were many of the 77 counties of Oklahoma no longer under a state of emergency.

Still, there is the cleanup and renewal that looms, the rebuilding of destroyed homes and trailers, to say nothing of families being reunited and readied for another season of storms in the era of climate change and global warming.

I should note that along with the family reunion, another bright moment occurred during our trip—my wife was able to get her research underway at the Oklahoma History Center and the discovery of precious documents about the city of Taft and her father’s store. And the prospect of more information in this regard and tending the gravesites mean the seasonal tornados will not impede what we have done each year. Tornados be damned!