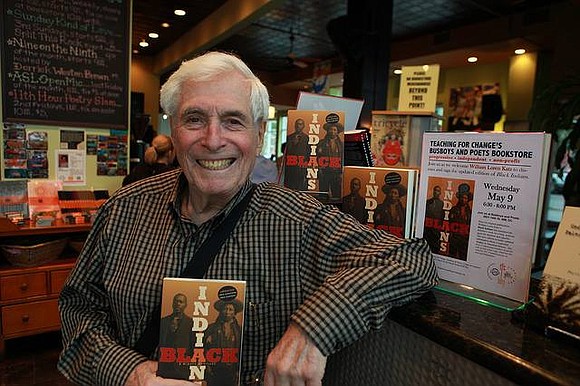 It was about two weeks after I had cited Dr. William Loren Katz in my column in this paper that I learned of his death. Earlier, I had received a copy of his recently revised edition of The Black West (Fulcrum, 2019) and found it timely to complete my column on Sarah Jane Woodson Early, one of the several African American women Bill discussed in the book.

I found it a sad coincidence when his wife, Laurie, sent me an email that Bill, on Oct. 25, had joined the ancestors. He was 92. Well, that should be a grand reunion since so many of them now long departed were evoked, particularly Black and Native Americans, in the countless number of books, essays, and articles he compiled.

While I mourn the passing of this esteemed historian, I gladly join the parade of praise now accumulating in publications and online all over the world as they remember a man who was tirelessly devoted to acknowledging the people and history that so often was neglected or simply ignored.

Of all the volumes Bill delivered my favorite was Eyewitness—A Living Documentary of the African American Contribution to American History. The book comprehensively documented, no illuminated the Black experience in America, from the 16th to the 21st century. Bill’s skillful delineation of the events and personalities takes on an almost cinematic quality, and you can practically hear and feel his accounts of the various wars and brutal encounters.

Quoting from The Black West is not the first time I’ve turned to Bill’s work to bolster my own, nor will it be the last because his research is an endless fount of valuable information that should be available to all readers.

An example of Bill’s summaries often preceded the documents he assembled in Eyewitness, as he does here in his tribute to Harriet Tubman, now so much in the news. “The most daring and successful conductor [on the Underground Railroad] was Harriet Tubman, a former slave,” he wrote. “She made nineteen trips into the South to bring three hundred relatives, friends, and strangers to freedom. Wanted dead or alive in the South, she was never captured and never lost a passenger. A determined worker, Tubman carried a gun for protection and drugs to quiet the crying babies in the rescue parties. During the Civil War, she went to South Carolina to guide union forces deep into Confederate territory.”

I had read many of Bill’s books long before I met him. If I had arrived a few years earlier as an educational and history consultant to the New York City Board of Education I would have met him face to face. I was hired to carry on some of the work he had begun on the inclusion of African American studies into the school system’s curriculum. He gave me some good advice on how to navigate my new assignment.

Over the years we shared emails and he often read my columns and news accounts, often providing me with additional background and insight as only he could. His advice always came with care and regard for my interpretations, and always with a sense of enlightenment.

The last time we saw each other was one day near his home on Mercer Street and we made promises to stay in touch, which we did, if only in the occasional emails and phone calls. Those moments were precious since I knew how busy Bill was with his next project, or I should say projects.

Obviously, like so many of his colleagues who knew him much better than I, Bill will be sorely missed and whenever that memorial occurs I hope I am able to attend, able to quietly offer my encomium for someone who cheered me loudly.