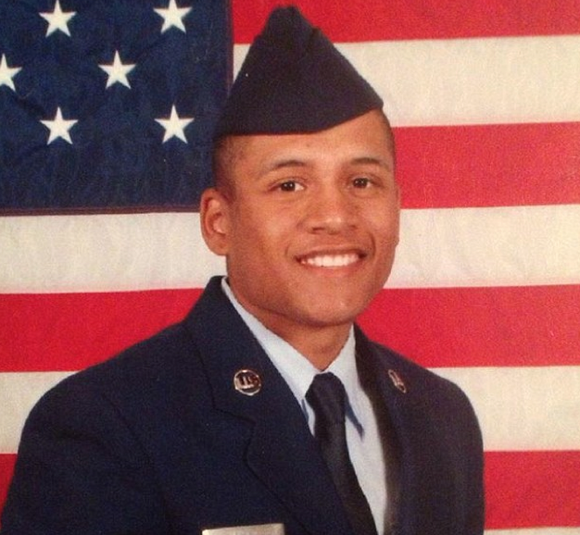 A white former police officer in Georgia was sentenced to 12 years in prison for killing 26-year-old Black Afghanistan War veteran Anthony Hill in 2015.

Hill was running around his apartment complex naked knocking on doors in Chamblee, Georgia when police were called. A woman who called 911 said she called to get medical attention for Hill, who was bipolar. He was not on his medication at the time of the incident.

Former Dekalb County police officer Robert Olsen arrived on the scene and approached Hill, who was unarmed. Olsen thought Hill was under the influence of drugs. He told Hill to stop, before Olsen opened fire shooting Hill twice. Olsen reportedly had a Taser, bully club, and pepperspray but did not use them.

Olsen pleaded not guilty and went on trial in September. Last month, a jury convicted Olsen on one count of aggravated assault, two counts of violating his oath of office and one count of making a false statement. The jury was made up of five Blacks, five whites, one Asian and one Latino.

DeKalb County Superior Court Judge LaTisha Dear Jackson handed down the sentencing this week. Olsen is reportedly prohibited from ever working in law enforcement again, profiting from the case and owning a firearm.

Protesters reportedly gathered outside the courthouse during jury deliberations. Activists followed the trial vowing to demonstrate on Hill’s behalf.

Hill was an Air Force veteran and suffered from PTSD. He was medically discharged from the military two years before he was killed.

“Sorry comes, to me, when you sorry, not when you got the consequences and then say you sorry,” said Carolyn Baylor Giummo, Hill’s mother, in a televised interview. “You can say you sorry but it doesn’t have the same weight.

“I wish I could have sat down and talked to him and asked him, ‘What actually happened? Tell me the truth. Why did you do that?’ I would want to hear what he had to say.”