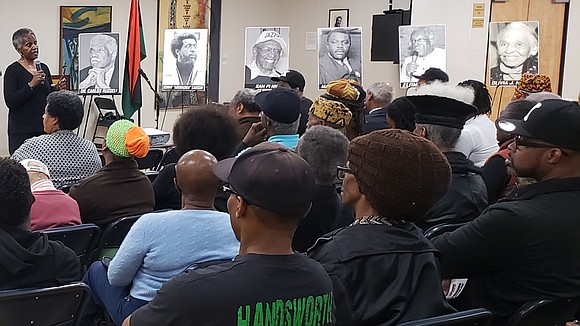 “Fifty years ago, in 1969, Carlos Russell and many others founded this day as one in which we come together and make an assessment of our people and what we need to do to strengthen our struggle for self-determination. They called for a ‘Day of Absence for Black people.’ No work! No school! No Shopping!”

Two gripping short videos were screened at the outset. One featuring Arkansas State Senator Stephanie Flowers who lambasted her colleagues while they attempted to limit the debate and pass a stringent “stand your ground law” in the state legislature earlier this year. The proposed bill eventually failed to pass. The other video was of actor Jesse Williams’ powerful speech at the 2016 BET awards ceremony. Both represented expressions of our people fearlessly resisting the continued oppression of our people.

“This is the first day of the next 50 years, and we will not let you rest,” Plummer explained. “Tonight we will begin to organize for Black Solidarity Day 2020. Critical issues for us include the escalating police terror, murder and brutalization of our people. In Texas, Atatiana Jefferson and Botham Jean were murdered by police in their own homes, in Brooklyn police pulled guns on a youth for allegedly not paying the $2.75 subway fare, and assaulted and arrested several others at the Borough Hall station for no apparent reason. Then there is the ethnic cleansing of our communities that has devastated families who have been systematically priced out of their homes by banks and corrupt realtors. Many are now living in shelters or in the streets.”

“There will also be a 2020 Census. They are going to count how many Black people are in the U.S., and let me tell you; you’re being erased. We did an analysis of the 2010 Census. Twenty-four percent of Black people suddenly vanished from Harlem. What did that lay the groundwork for? 125th Street becoming mega capitalist enterprises, because they knew you weren’t going to be here. No matter where we are from, we must check Black on the Census. We must be counted. If we don’t we will lose money from the federal budget which would affect allocations on housing, health care, transportation, education and child care.”

Black Solidarity Day 2020 citywide organizing meetings will be held on the first Monday of every month until November 2020. The first meeting will be held Monday, Dec. 2, 2019 at 7 p.m. at Sistas’ Place, 456 Nostrand Avenue in Brooklyn. For more information contact the Dec. 12 Movement and the Black Solidarity Coalition at 718-398-1766.