‘Dolemite’ now on Netflix: one of the best movies streaming! 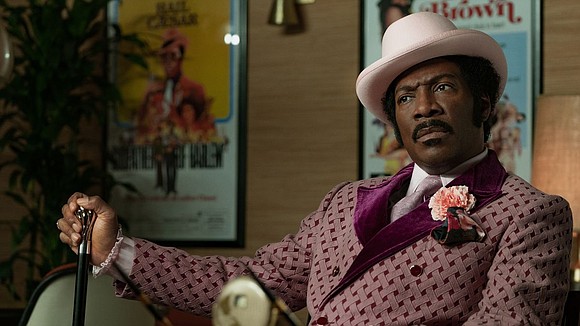 The comedic genius that is Eddie Murphy drives the new film “Dolemite Is My Name” now playing on Netflix. It’s no secret that Murphy in the role of Rudy Ray Moore, aka Dolemite, has stepped into one of the best roles in his entire career, and that’s saying something.

Dolemite is a complicated character who was born in the mind of Rudy Ray Moore, who is equally complicated. Ray the man and Dolemite the man are both filled with a fire that fuels a determination that is humbling.

“Dolemite Is My Name” is an outrageous true story about one of the best “blaxploitation” films made in the 1970s. Is it over the top? You bet it’s over the top—only a story this “authentic” could handle Dolemite’s story, and only someone as gifted (and yes, over the top) as Eddie Murphy could have pulled this off.

Let’s rewind the clock to 1975, the year that the film “Dolemite” (1975) was released. Rudy Ray Moore, who had never made a feature film, used his own money and pulled favors, it seems, from the ethers and completed the impossible. Then he started shopping his masterpiece and every major Hollywood distributor in the film industry passed on his film. Did that stop Rudy Ray Moore? No, he didn’t care that no one in Hollywood was interested in an African American story. He “four-walled” the film and distributed the film himself, making money and therefore catching the attention of the very Hollywood fat-cats who rejected him.

But where did this drive to do the impossible begin? We go back to 1970s Los Angeles, where Rudy is working as a record-store clerk. Although he’s in his mid-40s and rather chubby, his passion for carving out a career in showbusiness has never waned. He’s tried it all—recording R&B singles in the ’50s and early ’60s, and working as a stand-up comic, which landed him a job as an MC at a local L.A. nightclub. God bless Rudy Ray Moore, he tries to make the best out of his five minutes, but for the most part no one cares and no one laughs. Here most people would have given up, but not Rudy; he’s a straight-up-hustler with an ear for comedy. After listening to a homeless African American tell him about Dolemite and his colorful life, Rudy gets an idea. He records him and other equally colorful homeless men of color, paying special attention to the way they toss out obscenity with verve. Rudy looks deep inside himself and his closet and comes out as “the one, and the only” Dolemite, complete with a curly afro-wig and an inspired pimp walk.

Rudy fits into Dolemite like a second skin, hiding behind his creation and giving himself that boost of confidence.

Onstage he’s beyond bold, and Dolemite speaks his mind which is filled with X-rated stories that balance between the outrageous and the instructional. He doesn’t leave anyone out in his colorful stories, including calling someone’s daddy a pimp, their mama a whore and accusing them of being deep in the jungle selling their “ass door-to-door.” His delivery is brimming with bravado that keeps the crowd going wild, wild, wild! He’s a hit and Rudy knows how to sell the entire package, which includes recording a foul-mouthed party album inside his home, giving a new definition to grassroots entrepreneurship.

Murphy plays Rudy with a soulful touch. He commands the stage but he brings an inner life to Rudy and to some degree, the created character Dolemite. We all know someone like Rudy and maybe (gulp) we are Rudy, racing toward middle age and questioning our contributions on our desired profession. I found myself caring deeply for Rudy/Dolemite because he made something from nothing and that’s really—something!

Rudy makes his movie converting a druggie-squatter filled hotel into a film studio and his home. He hires Jerry Jones (Keegan-Michael Key), an up-and-rising but socially conscious playwright, to write the screenplay. He hires an actor, D’Urville Martin (Wesley Snipes), to direct. Again, rejected by major Hollywood distrubors, Rudy four-walled a midnight show in Indianapolis and stepped into history. In the end his film “Dolemite” grossed $10 million (the equivalent of $50 million today).

Director Craig Brewer (“Hustle & Flow”) has made “Dolemite Is My Name” a piece of eye-candy with a lot of the story (or rather, other layers of the story) being played out in every frame. The screenplay is co-written by Larry Karaszewki and Scott Alexander and it sparkles.

What really makes “Dolemite Is My Name” so significant today is what made the real life Rudy Ray Moore’s story relevant in the ’70s, and that is the lack of opportunity for Black people to make it in Hollywood. Today like yesterday, creatives of color must do things for ourselves to shake it up.