An evening with Masazumi Chaya, keeper of the Ailey flame 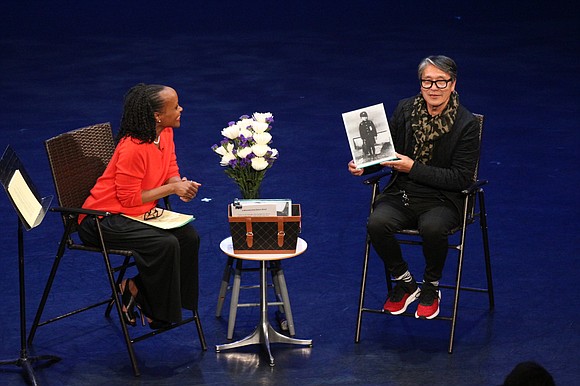 On a stage in the jewel box theater at the Alvin Ailey American Dance Theatre headquarters, the vibrant warmth and quick wit of the man who capped a 15-year career performing with the Alvin Ailey American Dance Theater with 30 years as the company’s associate artistic director—Masazumi Chaya—charmed and delighted an adoring audience. With host Renee Robinson, herself a former Ailey dancer (1981-2012), the two created a most engaging evening of dance history.

The two sat center stage on raised chairs separated only by a neat little table supporting a vase of flowers and a basket of props, including three books Chaya joked would come in handy if he needed help recalling specific details. In fact, the books—biographies of Alvin Ailey, Judith Jamison and Robert Battle—could serve as sources for anyone whose appetite was whetted by Chaya’s animated recollection of stories of a life well-lived.

Joking that the set reminded him of “Inside the Actor’s Studio,” Chaya needed only one question from Robinson to launch into what was not so much an interview as a conversation that was as thrilling as it was informative. In addition to years of working with Chaya, Robinson’s homework included digging up the review by New York Times critic Clive Barnes that resulted in Chaya being invited to join the AAADT in 1972 when he had only come to help his friend and fellow artists, Michihiko Oka, negotiate a contract.

Chaya’s journey brought him from Fukuoka, Japan, where despite parents trying to steer him toward a career in medicine, he studied ballet and eventually took a leap of faith and came to New York to pursue a dance career. As he recalled those early years it was clear that a series of signposts pointed him toward the AAADT at a time when the company was about to be catapulted into a dance stratosphere. The company would offer Chaya a creative home and family and a wealth of entertaining stories to share—and share he did. After joining the then 28-member company it wasn’t long before Ailey made Chaya the company’s assistant rehearsal director then rehearsal director for two years. He was also a master teacher, both on tour with the company and in his native Japan where he served as choreographic assistant to Ailey and John Butler before being named associate artistic director in 1991 after Judith Jamison assumed the position of artistic director when Ailey passed.

Taking the audience on a trip down memory lane with Robinson’s clever prodding, Chaya shared and even reenacted stories associated with some of the company’s repertory. There was the time, during a performance of George Faison’s “Gazelle,” when dancer Sarita Allen was supposed to drop to the floor only to be carried off when the stage lights went temporarily dark. Chaya reenacted Allen’s brilliant improvisation dropping to the floor and waiting a second before bolting up and dancing off stage as Allen had done leaving the audience thinking her moves were part of the planned choreography.

Infusing all of his anecdotes with that same energy Chaya carried the audience on a magical mystery tour that captured memories of what it was like to work with Alvin, how he broke the news that he wanted to stop dancing while he was still on top prompting Ailey to offer him his next big gig with the company. There were stories of how he used to stand in the wings and watch every performance of Judith Jamison in her magnificent solo, “Cry,” crying himself at the masterful way she injected every move with nuance and meaning. At one point, Robinson had him hold up paddles with smiley faces on them as she read off a list of the dances he’d performed so he could share stories. What a wonderful rapid-fire way to share a lively personal history.

In fact, the entire evening was as special as Masazumi Chaya is and, we were happily informed, he would continue to be since he will help maintain the Ailey legacy by mounting treasures from the Ailey repertory on companies all-around the world.