Kamworor retakes the title at the TCS NYC Marathon 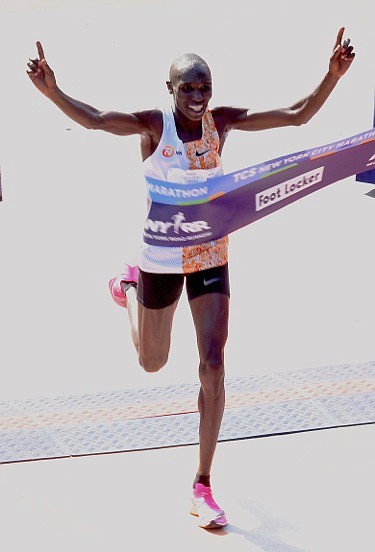 Geoffrey Kamworor can make a 26.2 mile trek across uneven terrain look like a short fitness run. That was his bearing early Sunday morning as the 26-year-old Kenyan and the rest of the professional men’s field took off at 9:40 a.m. on the Verrazzano-Narrows Bridge in Staten Island and ran through the early stages of the TCS New York City Marathon.

Kamworor, the 2017 champion, was looking to regain the title. The defending champ, Lelisa Desisa, seemed intent on earning back-to-back wins as he held the lead at the beginning stages of the race through the five boroughs. But by Mile 7, it was apparent Desisa wasn’t at his best. The 29-year-old Ethiopian, who was coming off of a marathon victory in Doha, Qatar on October 5, had fallen back into 17th place and never made it to the eight-mile mark, bowing out due to hamstring tightness.

So Kamworor and a group of other runners, including American Jared Ward, carried on at an unusually slow pace, moving along at 4 minutes and 57 seconds per mile with the pack reducing from 11 at Mile 17 to five two miles later. Compelled to seize the moment, Komworor, who set the world record in the half marathon in September (58:01) made his move at Mile 24, separating from fellow Kenyan Albert Korir and Ethiopian Girma Bekele Gebre.

Waiting to greet Komworor as he broke the tape in Central Park was his close friend and training partner Eliud Kipchoge, who set the world record in the the marathon in Berlin last year and blazed the first ever sub-two hour marathon in Vienna last month, a race and course set up for Kipchoge specifically to run under two hours and therefore not officially recognized as a world record.


After capturing his second TCS Marathon victory in New York in the last three years, Komworor strode into the media center to meet with reporters looking as if he could go another 10 miles easy.

“From the start of the race, I was feeling okay,” Kamworor said. “I was comfortable. I prepared very well to run this marathon.”

“The first few miles were relatively fast, but as it got later in the race…things got a little bit more tactical,” said Romanchuk.

There was a total of 53,627 finishers of the marathon, setting the record for the largest marathon ever.