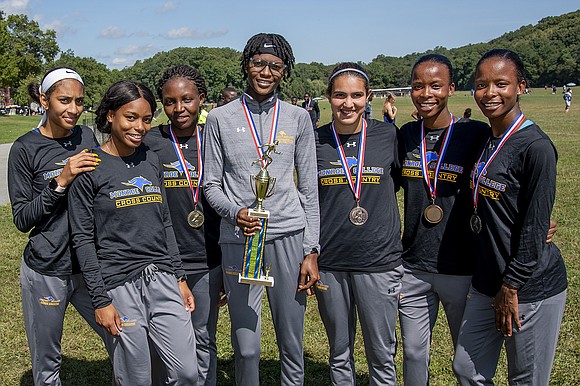 The men’s and women’s cross country squads at Monroe College are heading to Albuquerque, New Mexico to compete at the National Junior College Athletic Association cross country national championship meet on Saturday. After both squads claimed their fifth straight Region XV Championship two weeks ago, expectations are high. The runners have been preparing for the high altitude by training in altitude masks.

“In terms of the group of girls, we have unbelievable chemistry,” said head coach Shirvon Greene, in his 10th season coaching at Monroe. “They gelled so quickly…The sophomore leaders really welcomed the newcomers. From the get-go, when they led by example at practice, they made the transition [to college] much easier.”

Monroe is a hub for international talent, many of whom go onto high profile four-year institutions after their time in New Rochelle. The stand-out cross country athlete is Sharon Chumo, from Kenya, who is accustomed to running at altitude. Although sophomore Joanna Archer, from Guyana, excels at middle distances (400, 800 and 1,500 meters), she is currently giving her energy to cross country understanding how her placements are crucial to team success.

“We need five girls to score,” said Greene. “Joanna is the number five girl right now. Cross country is not really her forte, but…she stepped up her game to where she tries her best to stay up with the pack as well as be a good leader. She knows what the team does is going to depend on her. She embraces it to the point where she loves the challenge…By the other girls seeing her heart, that motivates them.”

There are also freshmen identical twins from South Africa, Thobile and Thulisile Amon, two local freshmen, Silveri Aguero from the Bronx and Jada Blackheart from Yonkers, and sophomore Faten Laribi from Algeria. To promote team chemistry that will carry into track season, Greene has had the runners take part in team-bonding activities.

Greene understands what this opportunity means to the student-athletes. The previous successes of Monroe Mustangs serve as motivation. Several of the alums are in touch with the current cross country team.

“Most of the graduates encourage them and tell them what they need to do,” said Greene. “It’s like a family.”