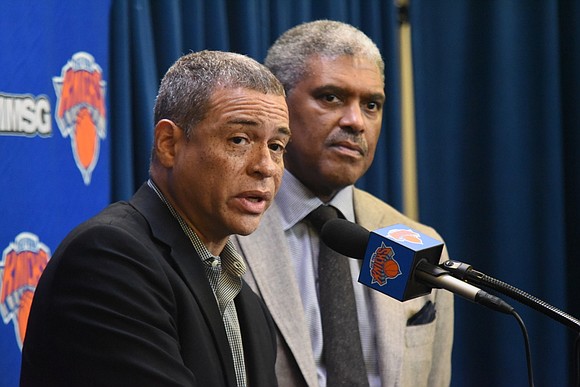 As the fourth quarter was coming to a close on Sunday night at Madison Square Garden with the Knicks concluding an embarrassing performance against the Cleveland Cavaliers, word trickled into the room that serves as the venue for pre- and post-game press conferences that Steve Mills and Scott Perry would be addressing the media prior to head coach David Fizdale’s regular appearance.

It was a shocking and unprecedented occurrence. As reporters began filing into the interview room, the usual lighthearted banter between them was replaced by relative silence and a palpable sense of the unknown. Were Mills, the Knicks’ president, and Perry, the team’s general manager, going to announce the firing of Fizdale only 10 games into the season?

Fizdale, in his second season as the Knicks’ head coach, had met a similar fate with the Memphis Grizzlies in his second year as their head coach at the start of the 2017-18 season, when he was dismissed after only 19 games. Yet Mills ended the suspense a little over 30 seconds into his opening statement.

“Hey guys, we just felt like given that this is our 10th game,” Mills began, “we felt we had an obligation to come and speak to you guys. Obviously Scott and I are not happy with where we are right now…We still believe in our coaching staff, we believe in the plan that Scott and I put together, and the players we assembled. But we also have to acknowledge that we haven’t played at the level we expected to play at.”

After getting trounced by the Sacramento Kings 113-92 at the Garden the previous Sunday, team owner James Dolan sat in his court side seats adjacent to the Knicks bench seven days later and witnessed another home blowout, this time to the Cavaliers by 108-87. As the fans heckled the Knicks throughout the debacle, it was evident to astute observers that eyed the body language of Dolan, Mills and Perry during the course of the game they were utterly concerned with and disturbed by the optics of what was transpiring.

It was inarguably a poor and inexcusable attempt put forth by the Knicks’ players after an uplifting 106-102 win over the Dallas Mavericks on the road two nights earlier. “I think the lack of consistency that for the most part we’ve seen it, but you see sporadic efforts, too,” Perry said on Sunday. “That’s what we talked about as we sat during this game and one of the reasons we wanted to come out and address you guys. Because we got to be consistent in all areas of the game, starting with the effort.”

It could be reasonably construed that Mills and Perry were positioning Fizdale to be the fall guy. Nevertheless, if that is indeed what they were selling, few, if any followers of the team were buying. They are as accountable for this mess as he is. While Fizdale has clearly struggled with establishing a discernible identity for the team and labored to install a steady rotation hampered by multiple missed games by Mitchell Robinson, Dennis Smith Jr. and Elfrid Payton, the roster Mills and Perry has formulated is incongruous and flawed.

The team lacks perimeter shooting to spread the floor, a point guard that can create easy baskets for his teammates and versatile defenders that can switch and cover at least three positions.

Expectations can often be ambitious and myopic, yet Mills and Perry are correct in asserting the Knicks should be more competitive than they have shown. But at 2-9 after losing to the Bulls last night 120-102 in Chicago, they are what their record says they are.