‘Reparations’ demonstrates the theft of innocence 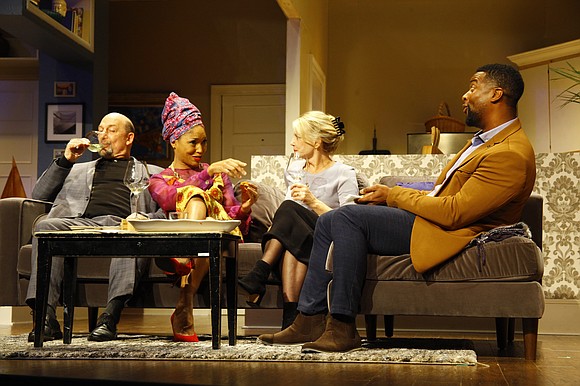 The Billie Holiday Theatre in Brooklyn has always proven itself to be a treasured, pull-no-punches company which presents theater about the Black experience that teaches the audience something and enriches our lives. This extraordinary theater institution has always given wings to the words of Black playwrights. Well, with its latest offering, “Reparations,” which is part of the 2019-2020 season’s New Windows Festival, it is still covering issues that are important to our community, but it is doing so from a different voice. “Reparations” is written by white playwright, James Sheldon, and directed by Black female director Michele Shay. Now, don’t be fooled by the name. That is not exactly or all that this play is about.

Sheldon gives us Reg (brilliantly portrayed by Kamal Bolden), a young Black book writer, and Ginny (intensely delivered by Alexandria Neil), an older white book editor who meets Reg at a book party. Ginny invites Reg to her home and, before you know it, the two are in a passionate embrace. The next morning Ginny, who is a widower of seven months, is smiling broadly and fixing breakfast for this strapping, seemingly affectionate young man. Reg tells Ginny about his novel and is interested in her getting it published. He talks to her about her husband Charles who taught at a private school. As the conversation continues Ginny becomes very uncomfortable with how much Reg seems to know about her late husband and even her daughter. Reg finally reveals who he really is and his relationship to her late husband. She then invites over a publisher—Alistair (stirringly played by Gys de Villiers) and his wife Millie (flawlessly played by Lisa Arrindell)—for lunch and that’s all I’ll say.

“Reparations” is a deep, heartfelt, at times disturbing drama that will leave you pondering so many things. One of the impressive aspects of seeing this drama, besides the impeccable acting, is without a doubt the stupendous, detailed, stunning scenic and props design by Isabel Curley-Clay and Moriah Curley-Clay. This was complemented by the lighting design by David Moodey, costumes by Niiamar Felder and sound by David Wright.

The play is being performed in Brooklyn Restoration Plaza, located at 1368 Fulton Street, but will only show through Nov. 24. For tickets call 718-636-0918 or visit thebillieholiday.org.