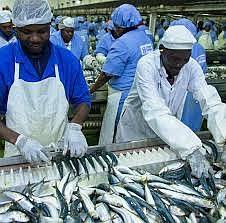 (GIN)—The stench of fish rot is wafting over Namibia. It’s taken down two Namibian ministers and leaves an Icelandic fisheries minister in the hot seat.

“A coterie of well-heeled vampires is sucking our fishing sector dry!” protested the local Namibian newspaper as news of the corrupt trading of valuable fishing quotas came to light.

Corruption in Namibia’s fishing industry is bleeding this income spinner nearly dry. Ever greater amounts of loot are being diverted into private hands and in the current case, as much as $500 million (U.S. $34 million) in kickbacks was described as the tip of an iceberg.

An investigation into the so-called Fishrot Files, the under-the-table sale of fishing rights between 2011 and 2018, was launched by Wikileaks which obtained some 30,000 internal documents from a whistleblower within SAMHERJI, a multinational fishing company based in Iceland. The leaked records exposed corrupt schemes by the company to gain access to Namibia’s rich fishing grounds off the African country’s shores.

The captured e-mails, internal reports, spreadsheets, presentations and photos exposed how the company spent millions of dollars in pay-offs to senior Namibian officials and politicians in order to ensure growing and continued access to the country’s resources.

Also exposed were lofty promises by SAMHERJI to build infrastructure in Namibia and create jobs. On the contrary, the company used its international corporate structure to transfer proceeds from the operations straight out of the country.

Meanwhile, to add fish oil to the fire, fishing quotas worth $150 million (U.S. $10 million) donated by Namibia to the Angolan government were allegedly hijacked by Namibian politicians and their cronies in both countries who resold the quotas to international fishing companies at market rates.

If the national interest is to be served, a major overhaul of the regulatory process in the fishing industry should be a matter of urgency, read one editorial.

And because so much of the apparent thefts occurred in state-owned enterprises, the government was urged to immediately scrap the so-called Namibianization program in fisheries. “It is nothing more than a ruse perpetuated under the guise of Black economic empowerment,” critics wrote in The Namibian.

“We trust that politicians, many of whom are themselves beneficiaries of this rigged system, will act in the best interest of the most needy Namibians and change the industry regulations for the better.”

A second round of documents could be released in the next two to three weeks when Al-Jazeera and other media partners publish their findings.