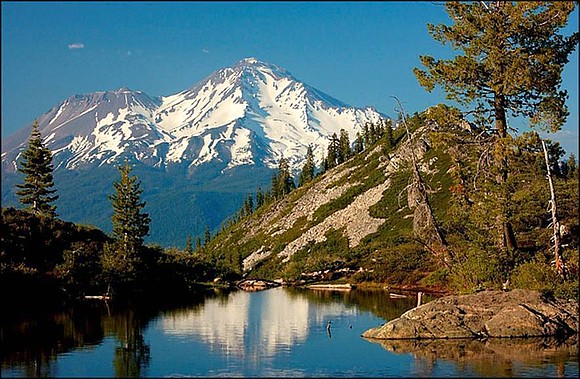 There’s a good chance you’ve never heard of Redding, California. When you think Cali, Los Angeles, Oaktown and San Francisco come to mind. Truth is, some folks believe the misnomer that Northern California begins and ends with the San Francisco Bay Area. Hardly. Some 200 miles north of San Francisco is one of California’s best kept secrets, Redding and Shasta County. They’re billing themselves as part of UpStateCA these days to generate some buzz.

There’s plenty to put in the spotlight. Foremost though know that Mother Nature is the star attraction. There are five national and six state parks in and nearby Redding. Recreation rules, with more than 225 miles of trails within a 15-mile radius that are ideal for biking, walking and hiking. You’ll have your pick of water fueled fun like kayaking, standup paddling, water skiing, sailing, swimming, boating and fishing at spots like Whiskeytown and Shasta Lakes.

Lassen Volcanic National Park is the only place in the universe where you’ll find all four types of volcanoes—shield, plug dome, cinder cone and composite. The mountain scenery is magical and sets the stage for walks and hikes. Another plus about Lassen, you won’t have to trip over other tourists like other national parks. It’s all about the serenity, especially at Summit and Manzanita Lakes, perfect for picnicking or just chilling. The clean air unclogs the brain. Be sure to see the Sulphur Works with its boiling mud pots and steam vents. You can view it safely from the sidewalk.

Get your geologic groove on with a two-hour tour of the Lake Shasta Caverns National Natural Landmark. Ride a catamaran across Shasta Lake, likely to be the greenest water you’ve ever seen. Once ashore, a bus takes you up steep, windy roads to the caverns that are home to limestone caves that have been called some of the most beautiful in the U.S.

The region is much beloved. There are waterfalls a plenty, some 50 of them. McArthur-Burney Falls Memorial State Park’s waterfall pumps more than 100 gallons of water daily down a 129-foot drop. You will just stare in amazement or do like many people and at least dip your feet in, or like bolder ones go for a quick plunge. If you have time, there are Lower McCloud Falls, Middle McCloud Falls, Hedge Creek Falls among others.

Redding, with just over 91,000 residents, may be a small town, but it serves up big fun, be it WaterWorks Park, Oasis Fun Center, Turtle Bay Exploration Park, Schreder Planetarium, Shasta Rock Club (rock climbing facility), or the Rare Air Trampoline Park. While you won’t find wild nightlife like in Los Angeles or San Francisco, you can find casinos, live music, breweries and wine bars. Moseley Family Cellars tasting room is worth a stop as the last few years it’s been voted the Best of the North State’s top red and white wines. Beer lovers will want to hit Woody’s Brewing Company, a favorite of locals, not only for the brewskies but the garlicky tater tots that are straight up addictive. No need to worry about where to eat. Redding has more than 300 restaurants. One of the newer ones is Mosaic, California cuisine at its yummiest. You’ll have dreams about the Mosaic Burger, with smoked gouda, caramelized onions, kale, tomato jam, rosemary fries and that pretzel bun. The artisanal pizzas will do the same. Try 1,000 peaks with Hawaiian onion jam, aged ham, pineapple, smoked sea salt, provolone, chili flakes. The Moonstone Bistro is a hotspot. The fare is organic, fresh, local, with cage-free meats and sustainable line caught fish. The fish tacos are a must.

Not only is good food plentiful, but it’s also affordable, much like the wide choice of accommodations such as the Oxford Suites and the four-star Sheraton Redding Hotel at the Sundial Bridge. Redding is an off the radar bargain, and a beauty.