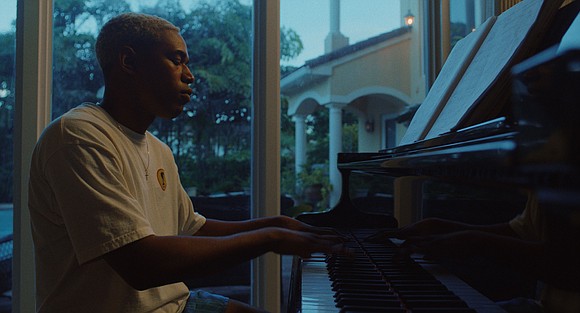 Set in South Florida, “Waves” dives into the pain and love experienced by an African American family. Instead of following a standard narrative, three-act structure, Shults uses a sequence of vignettes, plunging in and out of his characters’ lives to examine the details that make the Williams family so relatable.

Shults pulls out moments to help us feel and understand the family. When the couple’s teenage son Tyler (Kelvin Harrison Jr.) challenges his dad, Ronald (Sterling K. Brown), over breakfast, the father challenges him to an arm-wrestling match in the diner. Inside an SUV Tyler drives with one leg out the window, showing off for his girlfriend Alexis (Alexa Demie). Tyler’s kid sister Emily (Taylor Russell) asks Alexis how to apply lip gloss, a rite of passage that one would expect to be done by her unconditionally loving stepmother (Renée Elise Goldsberry).

Small acts, but all of them and more are telling glimpses of the inner workings of the family dynamic. Shults has a way of making everyday life dramatic, elevating it in a way that makes the mundane seem important.

In Shults’ hands, the structure is linear keeping audiences pondering even the smallest acts of the characters. He clearly shows how each of the character’s actions impacts one another. And like life itself, it’s messy and unpredictable.

In “Waves,” the young hero is the driven Tyler who is an 18-year-old high school wrestling star with a shot at a state championship and a university scholarship. Shults then shifts the focus to his sister. As the characters move into maturity they begin to understand the impact their actions have on others.

“Waves” explores acceptance and forgiveness in their many forms. I would not describe this film as faith-based but the movie does speak to the kind of real-life crises that often drive desperate people to seek answers or comfort, or both, in religious belief.

“Waves” puts the family dynamics front and center, relying on the strong emotional range of the actors. The director highlights moments with his carefully chosen music tracks to communicate emotions.

Shults does not shy away from the impact of social media with youths or how deeply hurtful the racially biased police stops can be to a young person. There is no question that the film will generate conversations. The strong word of mouth should bring a loyal audience. “Waves” is a quiet movie, but moving.