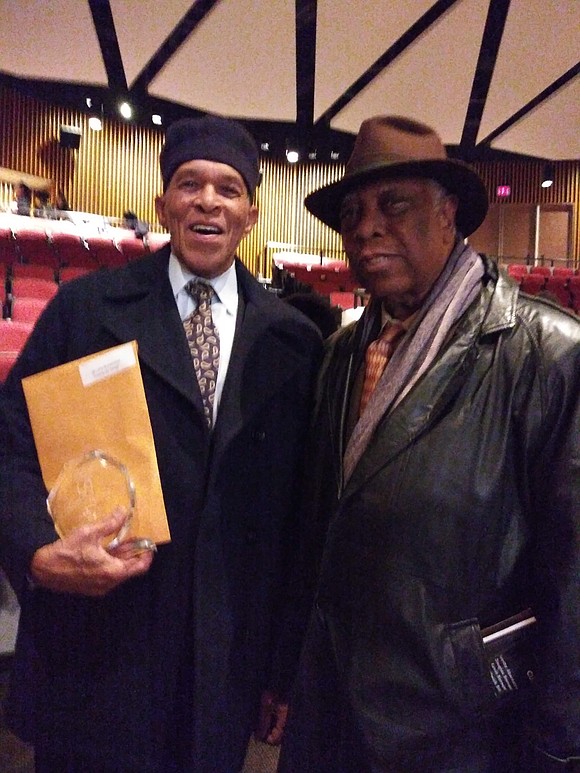 The marvelous 47th annual Vivian Robinson AUDELCO Awards, which recognize and reward excellence in Black theater, were recently held and it was a stupendous event! The atmosphere in the Tribeca Performing Arts Center at 199 Chambers Street was one of love and pride as African Americans acknowledged the excellent gifts and accomplishments in the past theater season by African Americans and AUDELCO honored some of the giants in the theatrical field. What a great evening!

It began with a moving performance by the cast of “Thoughts of a Colored Man,” a play that includes spoken word and movement. Then the Awards ceremony was anointed with a feeling of grace and love as evening co-host—actor, director, playwright and ordained minister Jerome Preston Bates—opened with a prayer while everyone stood with their heads bowed. Co-host Rhonda Ross, singer, songwriter and daughter of singer Diana Ross, and Motown founder Berry Gordy then came to the stage and shared, “I’m happy to see you here tonight celebrating ourselves!”

And that is exactly what the entire evening was, a celebration of the superb talent that is among our people. The big winner of the evening was the New Federal Theatre production of “Looking For Leroy,” which played at the Castillo Theatre and focused on the life of the late Amiri Baraka, aka Leroy Jones. This in-depth, impressive production won six VIV Awards, tying for best play; outstanding ensemble performance; playwright—Larry Muhammad; director of a play—Petronia Paley; set design—Chris Cumberbatch; and lighting design—Antoinette Tynes. The Public Theatre’s production at the Delacorte Theatre, the first with a predominantly Black cast in Central Park of “Much Ado About Nothing,” earned five VIV Awards for director of a musical—Kenny Leon; lead actor in a musical—Grantham Coleman; lead actress in a musical—Danielle Brooks; featured actor in a musical—Chuck Cooper; and choreography—Camille A. Brown.

Anyone who had the great fortune to see the Atlantic Theater Company’s production of “The Secret Life of Bees” would definitely appreciate the four VIV Awards that it came away with. “The Secret Life of Bees” earned best musical; LaChanze tied for lead actress in a musical; outstanding musical director—Jason Hart; and featured actress in a musical—Eisa Davis. Playwright Lynn Nottage, who adapted the play, beautifully remarked, “Whenever I’m here it always feels like home, like the embrace of a family.” The Nuyorican Poet Café’s production of “The Haunting of Lin Manuel Miranda” received three VIV Awards for featured actress in a play—Roz Fox; featured actor in a play—Robert Turner; and costume design—Carolyn Adams.

The AUDELCOs were absolutely phenomenal and rewarded so many other incredible productions. “Native Son” from the Acting Company tied for best play. Black Spectrum Theatre’s hilarious “Reunion in Bartersville” won best revival of a play. “Caroline, or Change” from the Astoria Performing Arts Center won best revival of a musical. Jessica Frances Dukes won lead actress in a play for her portrayal of Vera Stark in the Signature Theatre Company production of “By the Way, Meet Vera Stark.” Keith Randolph Smith, a tremendously talented actor, received the VIV for lead actor in a play for his role in the Rattlestick Company production of “Lockdown.” The VIV for solo performance went to Richarda Abrams for her performance in “First by Faith: The Life of Mary McLeod Bethune.” David Wright won the VIV for sound design for his work on “The Savage Queen.” Justin Ellington tied with Wright also receiving the VIV in sound design for his work on “Fireflies.”

The 47th annual AUDELCO Awards theme was “The Legacy Continues” and it demonstrated just that as it honored the Blacks in our community who are at the pinnacle of what they do. Grace Jones Lifetime Achievement Awards were rightly given to Woodie King Jr., founder of New Federal Theatre, a writer, director and producer, and Barbara Montgomery, actor, writer and director. King is someone who has made and nurtured the careers of so many Black actors, writers, directors and technicians. Montgomery is so accomplished, beloved by TV and stage audiences, respected and admired in the arts. Board of Director Awards were given to the late playwright and poet Ntozake Shange and sound designer, playwright, composer, radio drama producer/director and actor—David D. Wright. To celebrate the power of Shange, original actresses from productions of “For Colored Girls Who Have Considered Suicide When the Rainbow Is Enuf” performed from the piece. Sarita Allen, Carol Maillard, Ruthana Grave McQueen, Elizabeth Van Dyke and Robbie McCauley beautifully spoke the powerful words and moved

It was a moment of great pride and delight to hear the only lead Black Broadway producers for the past 15 years—Stephen C. Byrd and Alia Jones-Harvey—receive the Special Pioneer Award. This dynamic pair, founders of Front Row Productions, have been responsible for putting Black actors on Broadway in traditional white-actor cast plays including two Tennessee Williams works—“Cat on a Hot Tin Roof” and “A Streetcar Named Desire.” They also produced Horton Foote’s “A Trip to Bountiful,” “Romeo and Juliet,” “Eclipsed,” “The Iceman Cometh,” “American Son,” “Paramour” and currently “Ain’t Too Proud.” Byrd was glad to share, “In Broadway I saw there was a lane that wasn’t being addressed. We shed the light on diversity and inclusion.” And this team succeeds in doing that all the time.

Now, anyone who has seen any of Kenny Leon’s work, not just his AUDELCO winning direction of “Much Ado About Nothing,” but his Broadway direction of “American Son” that starred Kerry Washington, or “Children of a Lesser God,” or “A Raisin in the Sun,” or “The Mountaintop” or “Stickfly,” or the collection of August Wilson plays he directed including “Gem of the Ocean,” “Radio Golf” and “Fences,” will definitely understand and agree with him receiving the AUDELCO Outstanding Achievement Award. Leon, who received the Tony for best direction of a play and best revival of a play for “A Raisin in the Sun,” told the excited crowd at the AUDELCOs, “Before I directed ‘A Raisin in the Sun,’ Woodie King directed me in ‘A Raisin in the Sun.’ You’ve just been an inspiration to me all my life.” To the audience, full of actors, writers, directors and technicians he said, “Let’s keep telling our stories. Keep coming to see my stories and I’m going to keep seeing yours.”

Composer/lyricist/playwright/librettist/actress/director Mick Grant was given the Legacy Award. Grant has been part of 18 productions, including her musical “Don’t Bother Me, I Can’t Cope,” “Your Arms Too Short to Box with God,” “Working,” “Eubie,” and so many more productions. She is a Grammy, Drama Desk and Outer Critic Circle Award winner. Daryl Walkers, her cousin, accepted the award on her behalf as Grant recently got out of the hospital. Sharing her words, Walker read, “When I worked with the dynamic Vinnette Carroll at her tiny theater, The Urban Arts Corps down on 19th Street, Vivian Robinson always occupied one seat. She would always return later with other occupiers in tow. ‘People need to know what’s going on down here,’ she said. And the rest is history. My heartfelt thanks to the committee for this singular honor. My gratitude to all involved in preserving the Robinson legacy, which is a treasure. To all involved in helping to tell our stories, including curtain pullers and ushers, I send love.” Melba Moore performed to honor Grant and beautifully sang “Still Leaning On Jesus.”

This year’s Rising Star was Raif-Henok, an actor and dancer and son of Rhonda Ross and Rodney Kendrick. He was given the award by last year’s winner—Chinua Baraka Payne. Raif-Henok regaled the crowd with a delivery of a very powerful, detailed poem telling Black people to keep their eyes open and be aware of what is happening around you.

In the tradition of the AUDELCOs, the audience rose as the Curtain Call was spoken and we all listened to the names of our people who have gone on to join the ancestors. Then, still on our feet, AUDELCO President Jackie Jefferies came to the podium and she acknowledged the elders who were the foundation for AUDELCO—Vivian Robinson, Fred Powell, Mary Davis and her predecessor Grace L. Jones. There was such a spirit of love and oneness in that moment. Then AUDELCO board members were called to the stage and several came up including Toni Peterson, Ralph Carter, Cherine E. Anderson, A. Curtis Farrow, Bambi Jones, Mary Seymour and myself. The AUDELCO has Farrow as executive producer and Peterson and Kenny Seymour as associate producers. Benefit committee members include Kenneth Abrantes, Debra Ann Byrd, Lois Glenn-Carter, Bambi Jones, Gino Kaye, Karimah, Patricia McKenzie, Rome Neal, Marcia Pendelton, Bunmi Samuel, Mary Seymour and Count Paul Stovall. This year’s honorary co-chairs were actor, voice actor and singer Keith David and singer Dee Dee

The AUDELCOs were fantastic, inspiring and moving! Please make it your mission to go see, support and help Black theater to thrive!