Cheyenne Wright: Service with a smile 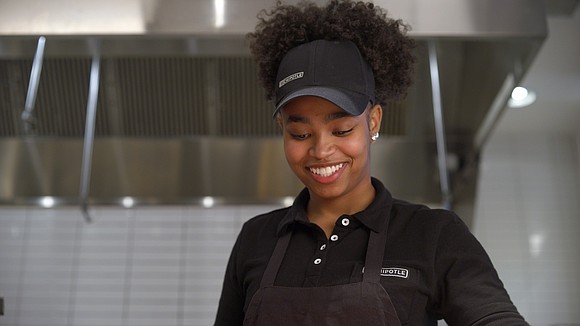 Cheyenne Wright is rising through the ranks at Chipotle. After 5 years, Cheyenne has gone from crew member to kitchen manager, service manager to apprentice. And, with all of this success, Wright has no plans of stopping any time soon; she hopes to be the youngest district manager in the region.

Growing up in Corona, Queens, Cheyenne’s ambition did not come out of nowhere. Wright has demonstrated a great work ethic from a young age. “I had a really good childhood,” says Wright, “I was a really good student, and I was always an NHS {National Honor Society} member even in middle school.”

“I think everybody has motivations for the things that they do, what gets them out of bed in the morning––my family was definitely one of my motivations,” says Wright. “I’m at an age where I want to pay my mom back for everything that she did for me.”

While Cheyenne fondly recalls her childhood, aspects of her teenage and young adult life were difficult. When her family moved to Florida as a teenager, where she would first work for Chipotle, Cheyenne found it difficult to assimilate to the new culture. Being a New Yorker at heart, Wright moved back to NYC. But, her problems were far from over.

“I was 18 years old when my living situation got tricky,” says Wright. “I was staying with my sister, but was homeless for a while and going from couch to couch for 6 months.”

Cheyenne started working for Chipotle again in NYC, and the company would present her with opportunities that would propel her out of this challenging period. After 3 short months, Cheyenne rose through the ranks from crew member to manager. Starting from the bottom of the ladder, Cheyenne puts a lot of thought into being a good leader for her crew.

“I’ve had so many different leaders. Some were good, some were bad. Being a crew member, I had my fair share of managers who I didn’t want to work with,” says Wright. “I know what my team would prefer in a leader and what they would not.”

With goals of owning her own restaurant one day, Cheyenne is incredibly grateful for her time at Chipotle. She feels she is being paid to learn how to run a business and a team. With the opportunities that she has been given, she hopes to give back to her crew members who work hard in return. As well as making them feel that they are a significant part of the team.

“People work hard when they know they are important,” says Wright. “I want to give the same opportunities that I was given––if you put in 100% I’ll put in 120% back.”