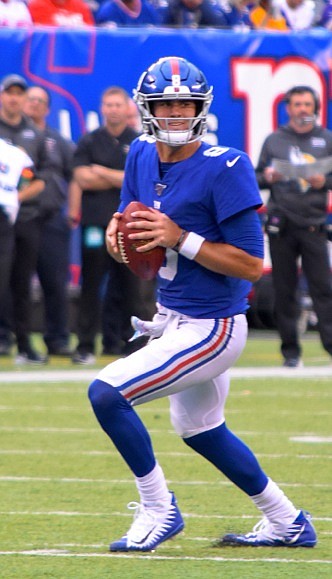 When will the Giants win again? That is a troubling question for a team that has been mired in losing since early October. More literally, for the better part of the last eight seasons.

Just focusing on their current circumstances, the Giants went into their game this past Sunday against the Chicago Bears on the road looking to end a six game winless streak. It didn’t happen and now their futility stands at seven games. Facing a Bears offense that has labored all season, particularly their third-year quarterback Mitchell Trubisky, the Giants’ offense had struggles of their own scoring points and fell to the Bears 19-14.

Trubisky threw for a season high 278 yards versus the porous Giants defense while rookie Daniel Jones, the Giants QB, was just 21 for 36 in passing for 150 yards. The 2-9 Giants’ last win came in Week 4 on September 29, beating lowly Washington 24-3 at MetLife Stadium. The Giants and Washington, also 2-9, are shoulder to shoulder at the bottom of the four team NFC East division behind the 6-5 Dallas Cowboys and 5-6 Philadelphia Eagles with five games remaining.

While the week to week trends in the NFL are volatile, the likelihood the Giants will meet their eighth loss in a row is high with QB Aaron Rodgers and the Green Bay Packers coming to New Jersey this Sunday. The 8-3 Packers will no doubt be surly and extremely motivated after being manhandled by the San Francisco 49ers in a 37-8 drubbing on Sunday.

There is no way to view the Giants season through rose colored glasses even for the eternal optimist. They are a bad football team. Yet head coach Pat Shurmur has identified a ray of light through the dark clouds that hang over the franchise.

“I see the young players improving. I see us competing in games, we’re just falling a little bit short,” he said during a conference call with reporters on Monday. “Most of the games, unfortunately, are within a score for most of the game, or we’re ahead and somehow, we just can’t find a way quite at the end.

“But I do think that there’s improvement behind the scenes. It seems like each week we add another young player to the mix of guys. Then they go out and do some good things, and then they do some things that remind you that they’re young. That’s part of it. But there’s no excuses for any of it. We need to do what we need to do to win the game.”

Jones, one of those young players, has had an uneven season after replacing Eli Manning as the Giants starting quarterback in Week 3 against the Tampa Bay Buccaneers. The change, which was the official end to Manning’s 16-year run as the Giants’ starter, has not translated to wins.

Jones has shown the potential to be a solid if not very good quarterback but has also displayed signs he could fall somewhere near the median of the league’s QBs. In 10 games played, he has passed for 2,134 yards and 17 touchdowns. Conversely, the 22-year-old Jones has eight interceptions and 10 fumbles lost, the latter being the most in the NFL.