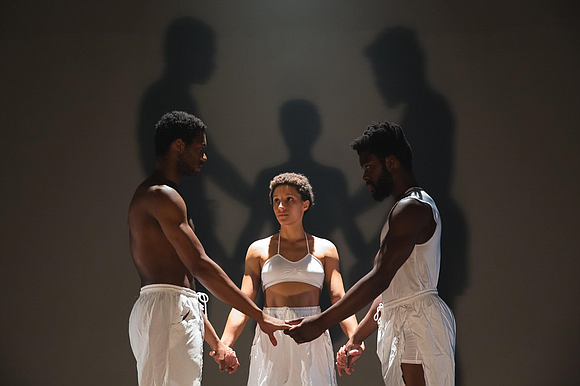 Kyle Marshall Choreography, which makes its debut as part of the Brooklyn Academy of Music’s Next Wave 2019 program (Dec. 4-7), is part of a roster of talented companies being showcased this season as BAM’s new Artistic Director David Binder introduces audiences to an exciting new crop of compelling young artists.

The talented young choreographer has already won a Juried Bessie Award for “exploring important ideas around race and sexuality in dances that embody rather than illustrate complicated issues.” At BAM he offers a double-bill that provides an example of the results of those explorations. One work, entitled “Colored,” kicks off with music that has the kind of funky beat you might hear in a club only to reveal that there is something more going on here than folks getting their groove on.

Marshall says, “‘Colored’ revolves around questions I have about what it means to be a Black man in America. I was interested in exploring the spectrum of Blackness. I call it a spectrum because there’s not only one way to be Black. I grew up with a Jamaican mother in a Jamaican household, so my definition of Blackness doesn’t always fit with a mainstream stereotype of Blackness. So, part of what I’m doing is understanding myself as a part of the community.

“So ‘Colored’ began with questions like what it means to be a Black dancer, a Black performer in a mostly white dance field in New York. I currently dance with Trisha Brown Dance Company and before that I worked with Doug Elkins. So as I have grown, I’ve started to become more aware of myself as a Black man in these mostly white spaces so, with my dancers/collaborators––Oluwadamilare Ayorinde and Myssi Robinson––we had a lot of conversations around tokenism in those spaces and the representation of Black bodies in those spaces, as well as what are the expectations of the Black body onstage and what are those expectations when we’re not on stage.

“The work deals with a lot of these questions while also playing with the focus of the audience–– looking at them looking at the Black dancing body. There’s kind of a twisted viewing where there’s one image that might feel like it represents Blackness and then there’s another that might represent a stereotype and another that celebrates it. So, the work focuses on the white gaze on the Black body.”

Marshall explains that the other piece on the program, though in a somewhat different vein, is equally personal and thought-provoking. “‘A.D.’ is the beginning of a thought about Christianity and how it relates to me and in a larger scheme, how Christianity affects us as a nation, us as a community.” With the addition of Bria Bacon and Miriam Gabriel, “A.D.” begins a conversation surrounding Christianity and its influence on the body. Together, the program shows Kyle Marshall Choreography’s mission of “seeing the moving body as a container of history, an igniter of social reform, and a site of celebration.”

“We’re also exploring iconography,” Marshall explains, adding, “Certain images and depictions of Christianity that we think of as collective understanding, for example the depictions of angels and demons. Angels are often considered white and child-like. Why is that always the case? There is an element of white supremacy in our understanding of what these angelic beings can be or look like. And, so, we reference these art history images using the hands, using symmetry to create balance and using text referring to the bible as a way of kind of meditating over passages. And, so what is the relevance for us, for a group of people that are believers and non-believers and finding its power. Finding its use.”

Marshall says he likes to think of his work as sharing––sharing both ideas and creativity––while at the same time giving the audience food for thought.