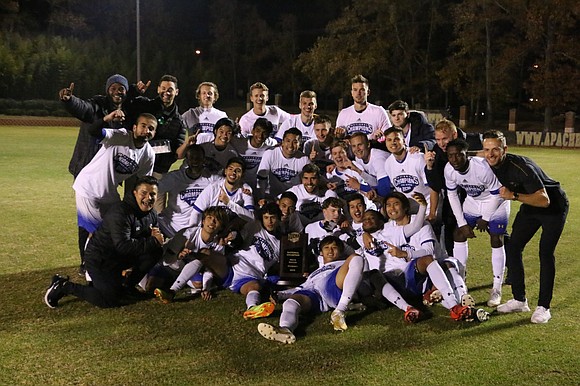 Soccer season came to a dramatic conclusion for Monroe College with both the men’s and women’s teams playing for NJCAA Division I National Championship titles. The men prevailed, winning their first-ever NJCAA Championship. It was a sweet victory for head coach Marcus DiBernardo, in his 12th season at Monroe.

“Everybody’s asking for the repeat already,” said DiBernardo. “I say we need a little time to enjoy this.”

It was an undefeated season for the Monroe Mustangs, with the men’s team amassing an 18–0 record. DiBernardo said the entire season and the championship run has been a great experience for everyone involved.

“The players first and foremost are the guys who won the championship. They did it every single day in practice and all 18 games. They took care of themselves responsibly throughout the year. They were mentally ready and over the course of the season, they became friends and they respected each other. You have to want to play for each other to win together, and they did that,” said DiBernardo.

DiBernardo also praised his staff and the incredible support system at Monroe. It’s a family environment and everybody on campus feels vested in the successes of the athletic teams.

The women’s soccer team fell just short of defending the title they won in 2018. The Mustangs headed into their final game 14–0, but lost to Tyler Junior College 4–1. It was the first loss for Monroe women’s soccer since October 2017.

Monroe alum Jean Casseus coached the women’s team this season. He said the team’s success is remarkable considering the Mustangs played with only 13 players on the roster as opposed to the 20-plus players on most teams.

“We figured out a way to get the best out of the girls that we had,” said Casseus. “What made my job easier to coach them is the way these girls carry themselves. They absorb all the information I am giving them. For us, we exceeded our expectations.”

The team’s top scorer for the season was freshman forward Sydoney Clarke. Casseus anticipates great things from her going forward in her collegiate career. “The level of maturity that she has is incredible,” Casseus said. “She is coachable, and that is the best thing you can ask for any player. She can hear information, absorb that information and put it on the field. She has a great future ahead of her.”