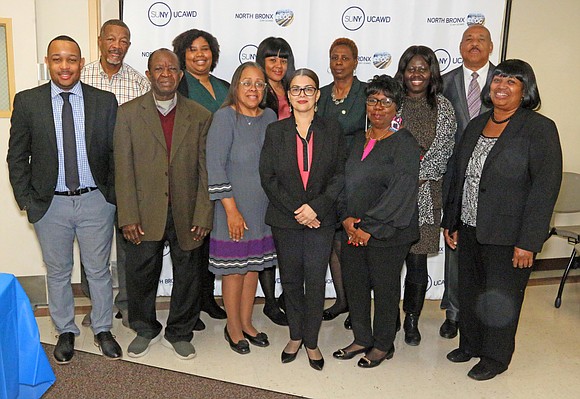 The SUNY North Bronx Career Counseling & Outreach Center is part of an integrated statewide system linked to 11 other Educational Opportunity Centers under the direct auspices of the University Center for Academic & Work Force Development in Albany led by Lisa McKay, associate provost and director, SUNY UCAWD.

This statewide network of 10 Educational Opportunity Centers (EOCs) and two Outreach and Counseling Centers has a 50 year history, EOCs have pioneered the way in providing urban communities with innovative academic programs leading to higher education, and vocational training programs leading to gainful employment and economic self-sufficiency.

The SUNY North Bronx Career Counseling & Center is also sponsored by the University Center for Academic & Work Force Development in Albany which orchestrated and oversaw the overall Community Briefing Engagement Branding Logo event in which over 52 various network service partnership providers throughout the city were in attendance including a representative from the N.Y.C. mayor’s office.

Executive director, Mitch Duren of the NBCCOC stresses the importance of an engaged and informed community is a community that thrives.

The Community Briefing engagement event not only provided a great opportunity for network providers to learn of each other’s services while networking, but in addition, surprisingly discovered “Tuition Free” programs and services offered at the State of the Art SUNY North Bronx Career Counseling & Outreach Center which consist of:

English as a second language (Computer Based)

A major goal and mission of the SUNY North Bronx Career Counseling Center & Outreach Center is to educate, provide vocational training within the surrounding community while retaining young adult learners to achieve their full potential in preparing for society as a valued skilled worker to compete in a global economy.

The variety and quality of “Tuition Free” Vocational Training, Academic Programs, and Services offered at the SUNY North Bronx Outreach Program at 2901 White Plains Road in the Bronx, provided to the community at large has made a major impact and inroads in servicing over 18,000 community residents for over 22 years since 1997.

Those who are interested in any of the “Tuition Free” services offered at the SUNY North Bronx Outreach Center can call 718-547-1001.