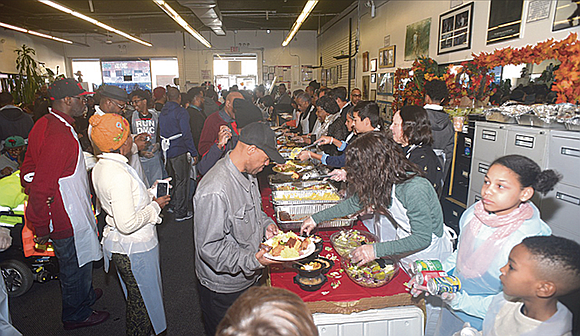 The spirit of Thanksgiving was felt across the city as people came together to celebrate the holiday with food and camaraderie. Throughout the week there was also a sense of giving back as many people across the city are volunteering their time to help others.

Thousands of people lined up from the Upper West Side to Midtown to watch the 93nd Macy's Thanksgiving Day Parade. Floats, marching bands, celebrities and Santa Clause made their way through Manhattan. The Morgan State University Marching Band participated in this year’s Giant balloons this year included Spongebob Square Pants, Smokey the Bear, Dr. Suess’s The Grinch and Olaf from Frozen. Ciara, The Black Eyed Peas, Kelly Rowland and Billy Porter were among this year’s performers

The National Action Network (NAN) hosted a free Thanksgiving dinner for the community at the House of Justice in Harlem. The event was free and open to the public. Earlier this week NAN distributed free turkeys to families.

Elected officials and other prominent New Yorkers joined Joel Berg, CEO of Hunger Free America, to release the organization’s annual survey on demand at soup kitchens and food pantries and new findings on food insecurity and hunger in New York City and New York State. The report is the only one of its kind identifying how many people in New York City and State are working and still living in hunger.

Food Bank For New York City partnered with Bank of America to hand out hundreds of boxes of Thanksgiving meals to New Yorkers in need at Food Bank’s Community Kitchen & Food Pantry in Harlem. The initiative helps lessen the burden on New Yorkers struggling with food insecurity over the holiday period. Last week, 640 volunteers from Bank of America packed 3,000 boxes of Thanksgiving meals, 300 of which will be distributed in Harlem.

Council Member Ydanis Rodriguez participated in a Thanksgiving Coat Drive last Saturday. The Latino Pastoral Action Center Inc., hosted the community event, which was sponsored by Major World, Dominican Sunday, S.O.Y, and Credit City. As the City drops in temperature, these organizations wanted to provide some relief to those in need for the holiday season.

The Founding Chapter of One Hundred Black Men (OHBM) with the support of corporate sponsors, Mount Sinai Health System, Macy’s, Emblem Health, Merck, United Airlines, and REBNY, provided food baskets to 10,000 New Yorkers during the 2019 Holiday Season. Kicking off last, OHBM provided $40,000 worth of turkey and food baskets to help local churches and institutions provide meals for New Yorkers between Thanksgiving and Christmas.