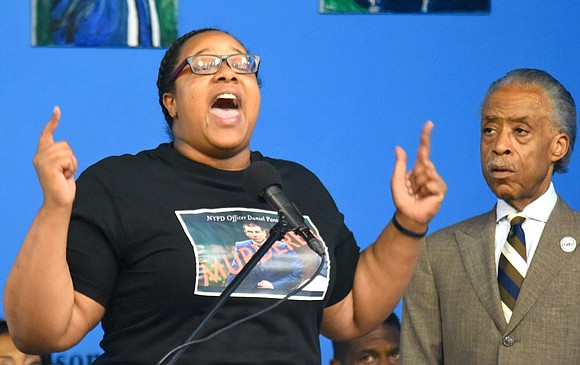 The fight to prevent another police killing similar to that of Eric Garner’s gains momentum as his youngest daughter petitions to change law enforcement policy.

Emerald Snipes Garner started the petition on Change.org to get support for the law named after her father that would ban police departments in New York State from using chokeholds on civilians like the one that killed her father in 2014. With a goal of 50,000 signatures, the petition had 40,000 as of Wednesday.

Emerald has been in a whirlwind herself since her father’s death, which was caught on viral video. The infamous video shows former NYPD Officer Daniel Pantaleo putting Garner in a chokehold for allegedly selling untaxed cigarettes in Staten Island. He can be heard saying “I can’t breathe.”

Panteleo and the officers involved were not charged in the murder. Last month, after five years, Pantaleo was fired after being found guilty of wrongdoing at a departmental hearing.

“The hope is that the Eric Garner Law will make officers understand they cannot just kill us and walk free,” Emerald said. “It would mean that any officer who uses a chokehold on an unarmed civilian would be prosecuted in New York State.”

Along with fighting for change, Emerald has also dealt with the deaths of her sister, Erica, in 2017, and, more recently, her step grandfather, Ben Carr.

“My sister Erica Snipes Garner died before she could see justice for our father, and I refuse to leave this Earth until I see justice for my dad and all others who were murdered at the hands of the murdering police officers who took an oath to protect and serve the communities,” Emerald said.

This isn’t the first petition for Garner. Over the summer Emerald launched a petition to call for Pantaleo’s firing. Just 30 days after the petition was published, it received over 144,000 signatures.

“We have seen this story repeat itself all too often,” Mosley said. “The fight isn’t over. So often we see these tragedies in newspapers. We read the excuses made for their actions and the lies that are told from one jurisdiction to another. Our communities have seen so many young Black and Brown boys killed at the hands of police and there’s hardly ever any consequences.”

Emerald, like others in her family, wants chokeholds banned not just in the state but across the nation.

“While Officer Pantaleo is no longer patrolling the streets, real structural change will only happen if police departments around the country are required to ban the type of dangerous chokeholds that took my father’s life,” she said.