Even with veterans added, the Knicks still focus on their youth 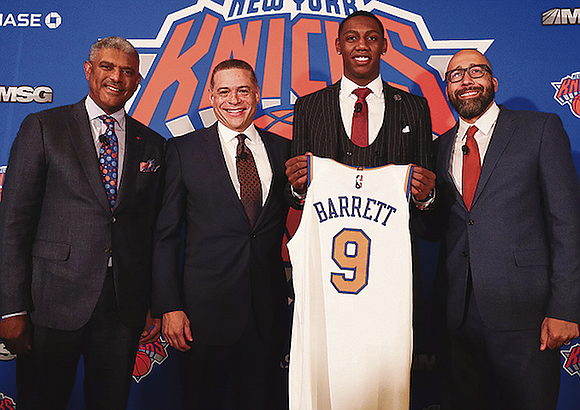 The Knicks held their annual Media Day event this past Monday, Sept. 30, in front of the opening of training camp. Team president Steve Mills commenced the gathering by doing his best to effectively frame what was conclusively a disappointing summer for the franchise in not landing one of the top free-agents on the market.

The pain for the Knicks and their fan base was palpable when Kyrie Irving and Kevin Durant signed with the Brooklyn Nets and will now showcase their immense skills roughly 5 miles away from Madison Square Garden at the Barclays Center. Even though Durant may miss the entire upcoming season recovering from an Achilles injury, the mere vision of him in a Nets uniform for those in the Knicks orb is unnerving.

For a time last winter and then folding over into spring, Mills, Knicks general manager Scott Perry and owner James Dolan rationally believed their odds of acquiring Irving and Durant were favorable. On Monday Mills was left in a position to put forth a cup half filled narrative. “Obviously we had a summer that we were really excited about,” he said to the assembled media and those tuning in to the livestream.

“We were able to add nine quality players to our roster. We added seven of them via free-agency, two of them via the draft. As we all know in this league free-agency is a very, very fluid process in the NBA.

It doesn’t take much deep analysis after listening to Mills to deduce that the Knicks by necessity overhauled their roster after finishing with the worst record in the NBA at 17-65. It is also evident by the length of the contracts signed by the new Knicks, the franchise's key decision makers will continue to hunt a major influencer on the level of Irving, Durant and Kawhi Leonard in the ever-changing landscape of the league. All of the deals are in essence one and two year deals which will leave the Knicks with cap flexibility.

Their strategy remains the same as it was entering last season: Grow the young talent led by Mitchell Robinson, Kevin Knox, Dennis Smith and rookie R.J. Barrett while trying to establish a fledgling winning culture with the goal of developing viable player assets to add to the six first round draft picks they currently own over the next four seasons to make the team an attractive destination for the NBA’s premier players either through free-agency or trades.

It is the formula the Nets successfully instituted to elevate themselves from a 28-54 team in the 2017-18 season, one game behind the 29-53 Knicks, to a playoff team last season to a major player in the Eastern Conference less than two years later.